Icon Reboots Are Freaks Of Nature

This is Bugs Bunny. Bugs Bunny is a good-natured but mischievous fictional character who frequently asks "What's up, Doc?" and is fond of carrots and Stephen Foster songs. He exists in an era when men wore hats and it took a large building to house one computer.

This is not Bugs Bunny. This is an attempt to fix something that isn't broken. It's designed to appeal to a younger audience, but instead it only dilutes the magic of the genuine article. 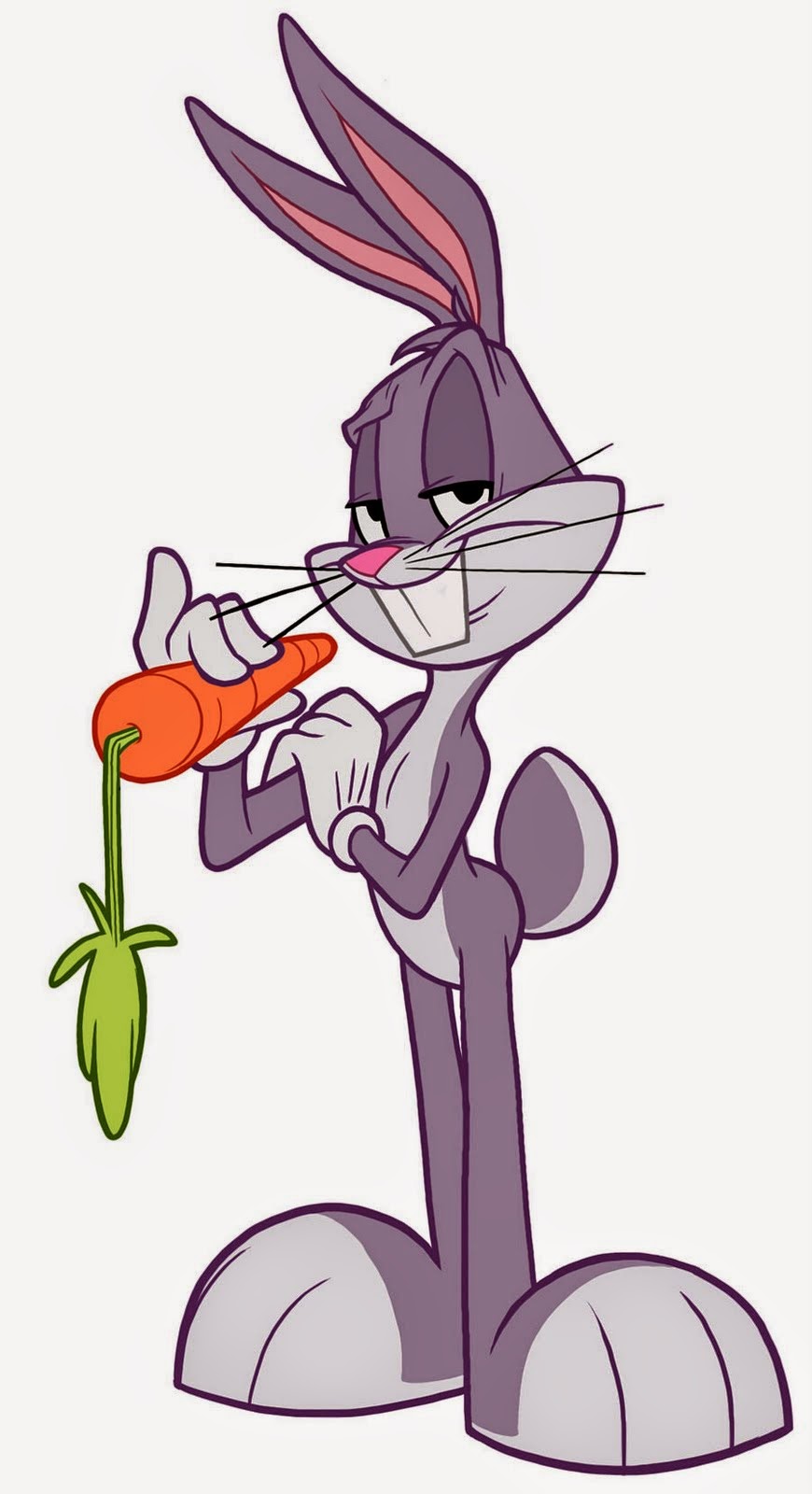 With few exceptions, there is exactly one best version of any fictional character. When attempting to revive a character, failure to remain totally faithful to that character, that character's appearance, attitude and actions, and perhaps most importantly, the time period in which that character exists, is doomed on all levels except perhaps the ability to generate profits. Although Warner Bros. is clearly a business, and profits are the primary goal of any business, when the best version of a character becomes beloved and ingrained in the popular consciousness, to alter that character in the hopes of generating revenue is an insult and betrayal of the highest magnitude.

Bugs Bunny, like most fictional characters, was not fully formed when he first appeared. The refinement of a character in it's initial period of existence is a fascinating process. When Garfield debuted in 1978, his personality was fully-formed, but his appearance was not. 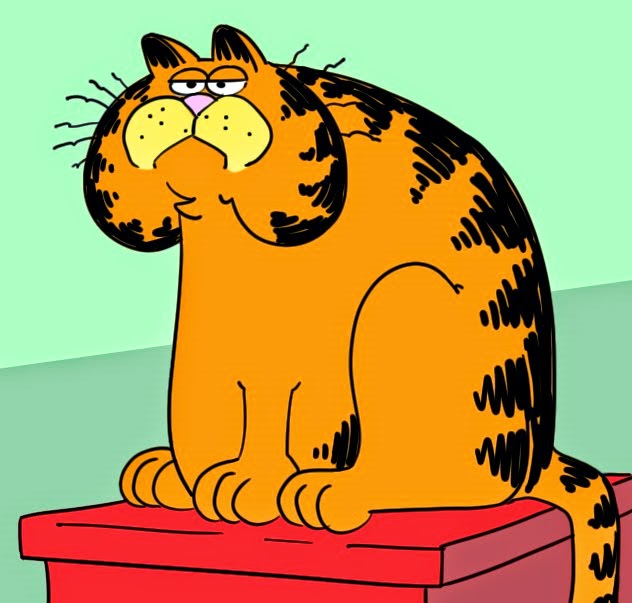 The evolution he went through was purely a product of his creator, Jim Davis. He probably received feedback from readers and editors, but in the end, he was the person responsible for fine-tuning his creative vision, and he did so with great care to preserve the aspects of the character that were fundamental to his appeal.

Charles Schulz was fiercely protective of the characters in his Peanuts universe. After he had evolved his characters into their best versions, they never changed again. Think of any Peanuts special or movie. The Charlie Brown of 1965's A Charlie Brown Christmas is essentially the same Charlie Brown of the 1977 feature Race For Your Life, Charlie Brown! In 2011, a new Peanuts special called Happiness Is A Warm Blanket, Charlie Brown was released to wide acclaim. Great pains were taken to make it as faithful to the source material as possible. It is a rare and shining example of character preservation done the only correct way. It respects and honors the right a fictional character should have, the right to be what it is, always.

Unlike Charlie Brown, most characters are not controlled by their original creators. An iconic character that is controlled by a media conglomerate exists in peril of being augmented, reimagined, and regurgitated in a manner that destroys that character's magic. Although artists are uniquely qualified to create, managerial types routinely believe that they are qualified to improve on an artist's vision. However, their improvements are driven soley by profits, the very last thing that genuine artists truly care about creating. Schulz made a fortune off Peanuts, but his comic strips are so utterly without contrivance, that one gets the feeling he would have been just as happy drawing them for free.

What was the conversation that led to the bastardization of the beloved 60's icon, Underdog? 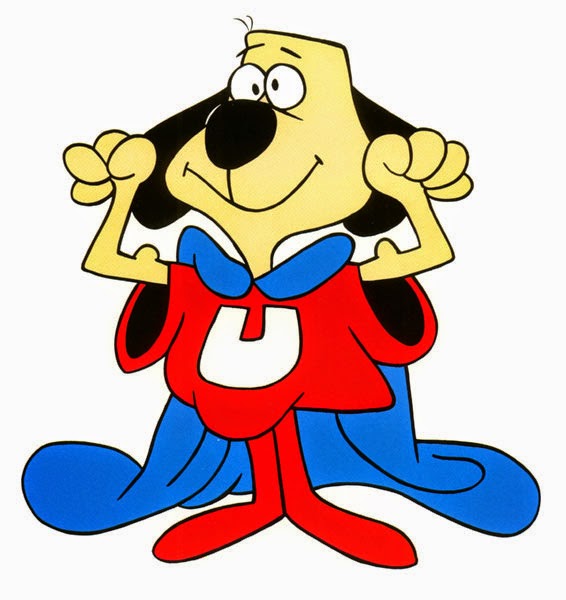 Ass # 1: Well, as it turns out, we apparently own the character of Underdog.
Ass # 2: Under-who?
Ass # 1: Yeah, he was on Saturday mornings in the 40's or 50, maybe 60's, I dunno. Little doggie in a Superman suit. Had a nerd voice. Here's a clip from our file.
(Runs video montage)
Ass # 3: And why should we care about this?
Ass # 1: Well, believe it or not, this property was hugely popular and still has a fan base among adult animation enthusiasts.
Ass # 2: That I can believe!
(Room erupts in laughter.)
Those freaks. But can we make money off of it?
Ass # 4: My kid wouldn't watch this lame nonsense.
Ass # 1: Oh yes, we have to totally change it from the ground up. No question.
Ass # 5: That nerd voice has to go. He's gotta have a cooler, more accessible voice. Like everyone's best friend.
Ass# 3: Are we thinking CGI with this?
Ass #1: That's definitely one option, but consider this...live-action.
Ass #4: That's brilliant! Kids love when real animals talk! Heck, I love it!
Ass #2: The theme song's kind of catchy. Keep that, but we'll metal it up a little bit. Or dub step.
Ass #4: Can you guys believe how brilliant we are?
Ass #5: Totally. Ladies and gentlemen, we have once again taken something completely lame and worthless and turned it into a gold mine.
(In unison): Gooooooooooold...yeeeeesssssssssss
Ass #3: But what about those purists? The adult fans who grew up with the original?
( Room erupts in laughter.)

The budget for this tragedy was $60 Million. According to Box Office Mojo, it has grossed $65 Million worldwide. Yay.

As I noted earlier, there are a few exceptions to the "one best version" rule. Batman is a great example. Throughout his existence, he has been reinvented so often, that it really would be impossible to declare any one version as definitive. He has been both the grim gun-toting avenger and the friendly lawman. He has been campy. He has danced on giant typewriters and worn rainbow colors. There is truly a Batman for all seasons. In the case of Batman, ever fan must choose their own definitive version. Of course, even the exceptions must respect certain disciplines to maintain authenticity. Batman must always be driven to eradicate evil by the death of his parents. 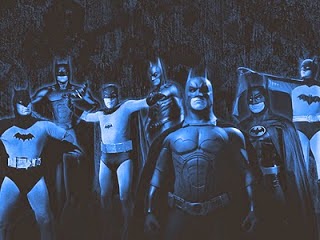 I've been hearing the phrase "corporate responsibility" a lot lately, mostly in news articles that lament the loss of corporate ethics. I hope that the corporations that own the rights to the cherished fictional icons of the past will one day soon realize that the characters they have been toying with for so long should no longer be subject to the whims of popular trends, and should instead be restored to their proper heritage.

This is Archie and his friends. His best version lives in Riverdale in the 1960's. 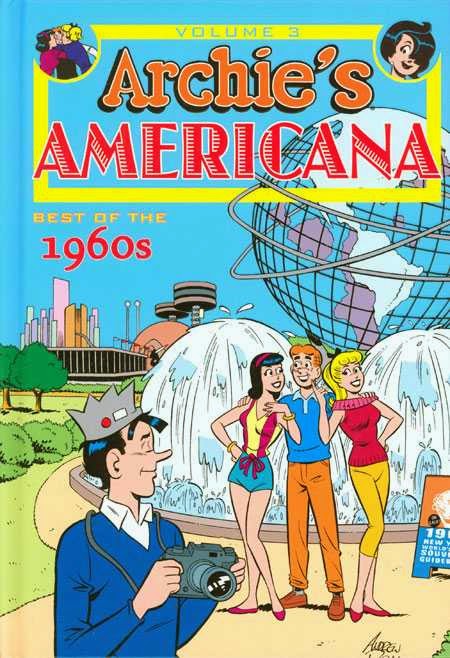 This is the best version of The Lone Ranger, with his faithful sidekick Tonto. Note that Tonto does not look like a voodoo priest. 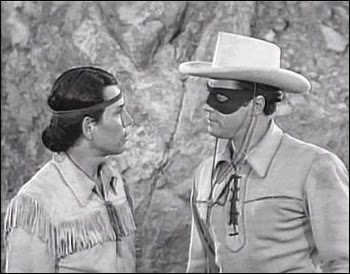 This is Fred Flintstone. He must never walk, talk, or behave like Peter Griffin. Ever.

This is Superman. He's never married. He represents all that is good and noble about humanity and none of what is terrible. He will, if asked, rescue a cat from a tree to restore a little girl's smile. He smiles. He uses his great intellect to solve problems, and resorts to violence only when necessary. He is a good guy and does not care if kids think that is corny. 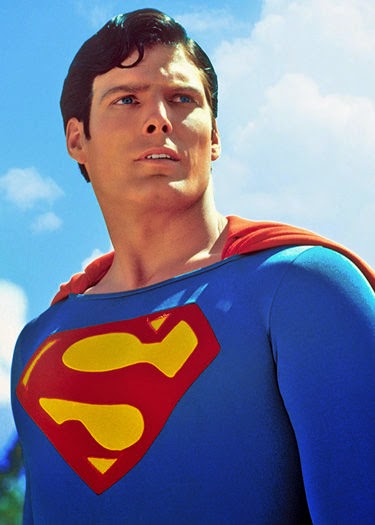 Attention WB! Please don't draw Scooby-Doo and the gang like this. Did they all they just get lobotomies? 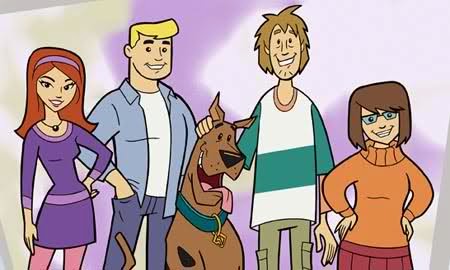 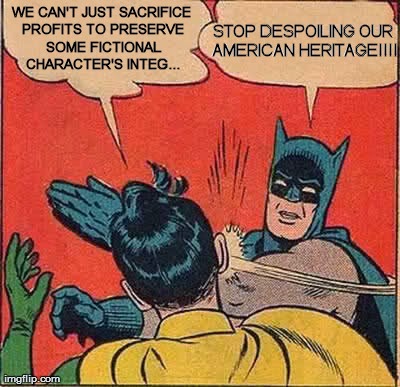 The preceding message brought to you by the local chapter of the FCDF, The Fictional Character Defense Fund.

With your help, we can stop big media corporations from ever making Popeye rap! Let's tell these big shots Smurfette looks fine without a tattoo and sparkly lip gloss! Don't let them force Sherlock Holmes to put down his pipe and pick up an e-cig!

I can’t begin to tell you how much I agree with this post! So much so that I’ve linked to it on my Blog, where I hope it leads to more discussion!

And, was anyone worse at this than post-sixties Hanna-Barbera? Alas, poor Yogi! From teaching kids social and environmental lessons they were too young to learn from “All in the Family” to hanging at “Jellystone mall”? Eeesh!

Oddly, one reboot I was very curious to see was Seth MacFarlane’s Flintstones. It may not have been the genuine article, but at least I would have found it funny (in a bizarre sort of way) – as opposed to shamelessly tying it in with the WWE! Eeesh, again!

Great job on this!

I think that the "best" version of Archie is the most difficult one to say. From the 40's up into the 2000's, there have been good versions of Archie...those that remained true to the personalities and settings of "classic" Archie, while allowing the writers and artists to do what Archie Comics do best...lighthearted stories about idealized "typical" teens that manage to reflect (and yes, even exploit) current fads and trends. Not the stories where the kids are super heroes, secret agents, time travelers, married grown-ups or zombies, but teenagers enjoying life and getting into those little problems that seem huge when you're 17 years old.

Christopher Reeve will always be the best incarnation of this character that was ever captured on film, an American icon played to perfection...and as much as Family Guy has made me laugh over the years, you were also right about the Fred Flintstone bit...;)