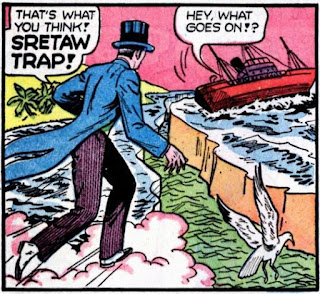 Many comic characters during World War II pitched in to help the cause of freedom, and Zatara was no exception. In this nifty tale from Action Comics #57 ( Feb. 1943, DC), the magician goes treasure hunting to raise money for "tanks and planes and guns," oh my! The fetching art by Joe Sulman shows an appreciation for the Al Capp style, a claim that is backed up in this 1977 newspaper article. WON GNIDAER NIGEB! 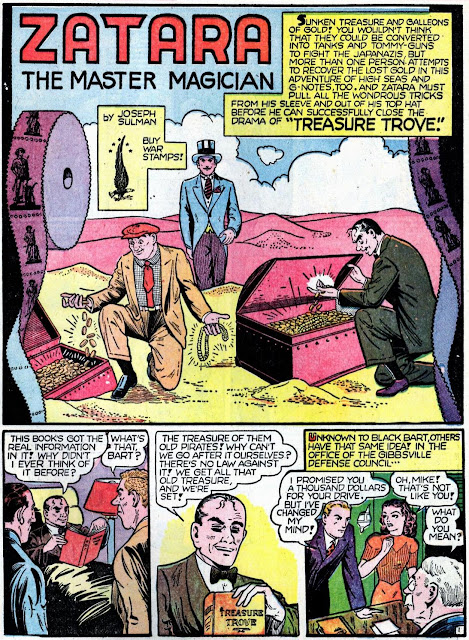 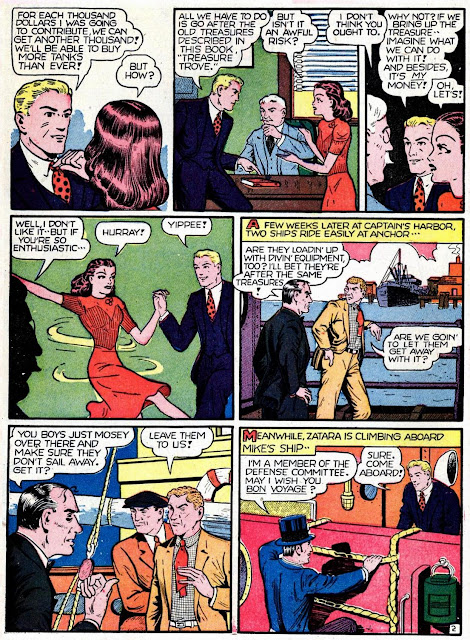 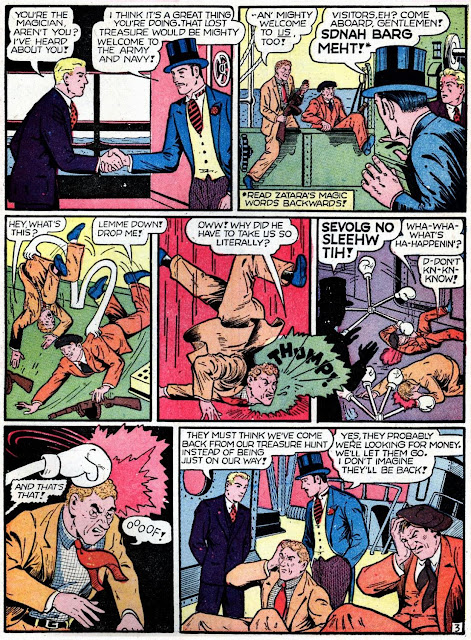 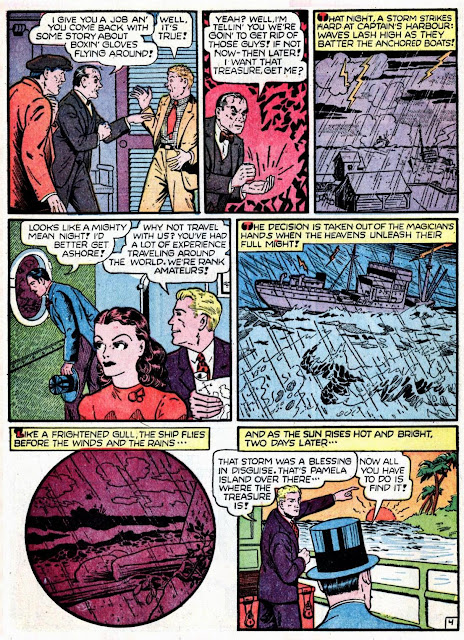 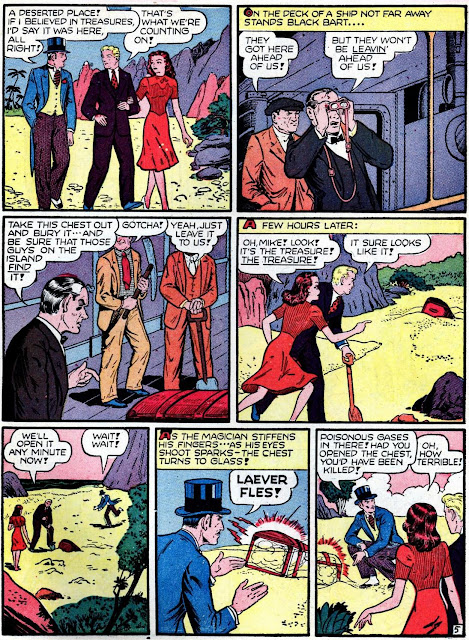 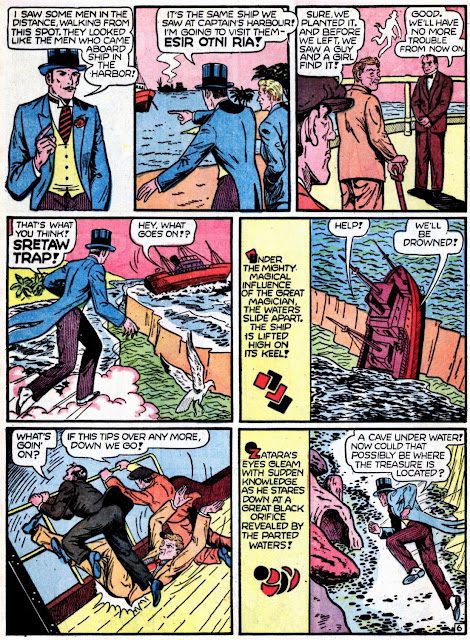 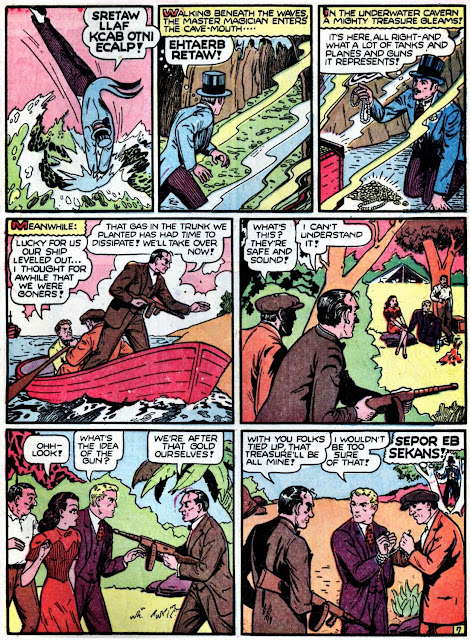 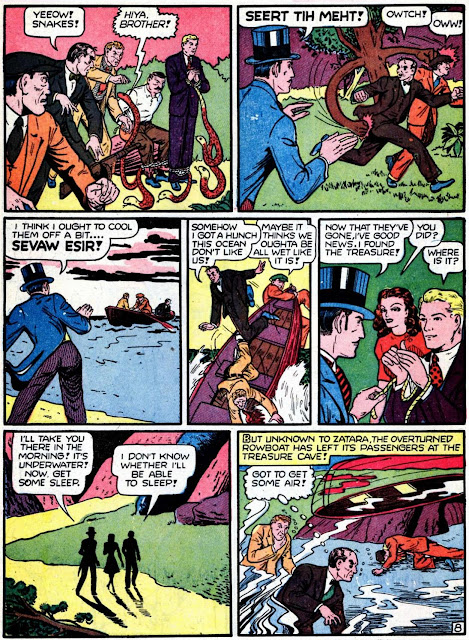 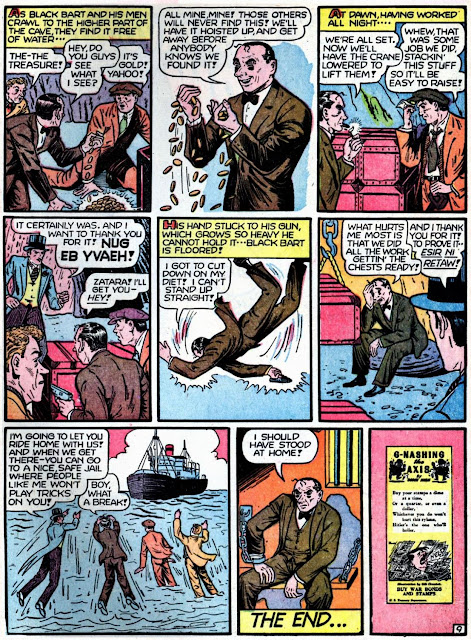 
The last time we visited, I expressed my intent to separate my geeky obsessions into different blogs. The premise seemed logical to me and the thought process went something like this: "I don't really have time to maintain my blog," I thought. " Now, if I had five blogs it would be totally different." 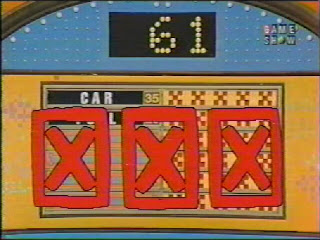 Things I've Been Doing Instead of Blogging

1.  Getting married. Third time's the charm. Right? Right??? I am so confident that this union will last, that I've completely erased all the memories of the other two times when I was completely confident that a marital union would last. 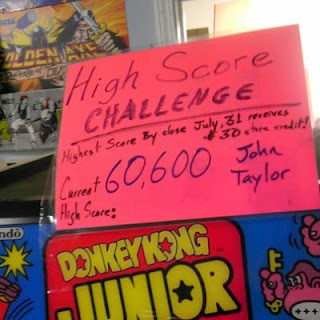 2.  Playing pinball. The missus and I are taking a honeymoon cruise in November, so we spent our second day as a married couple indulging our shared passion for the game that Pac-Man murdered. We made a trip to Lost Ark, an awesome arcade/gaming shrine in Greensboro, NC. They had many of our faves, White Water, Who Dunnit?, Whirlwind...we basically love any pinball game that starts with a "W." I also played Twilight Zone, Monopoly, Indiana Jones, and Junk Yard. But I always found myself back at Whirlwind, because, y'know, it has an actual fan to minimize geek sweat. While I was there, I took the July High Score challenge for Donkey Kong, Jr. and won. Before we left, I had racked up somewhere close to 80,000 points. Shhhh...don't tell Billy Mitchell. July ain't over yet and $30 is a lot of quarters. Anyway, pinball aficionados are going nuts over FarSight Studios' new multi-platform Pinball Arcade project, which promises to become THE way to experience your favorite Bally, Williams, and Stern pinball classics in the comfort of your own home.
3. Writing songs. Latest titles in my songbook are "Up The Apples,"  "Post-Argument Blues," and "Homework." Now, if I could only develop some demo-recording discipline. I guess I've been...
4. Watching too many TV shows and movies. Nostalgia is ruling the day. Dirty Harry. John Wayne. Johnny Weismuller Tarzans. Three Stooges shorts. Hanna-Barbera cartoons. Ghidrah, the Three-Headed Monster. I enjoyed the Avengers movie but I'm really looking forward to The Dark Knight Rises. I also will admit to being thrilled that Filmation's live-action Shazam show from the 70's is being released, but only if you rip off a few of my fingernails, as it's truly a guilty pleasure. If you are not averse to owning tv shows digitally rather than physically, both seasons of The Outer Limits are currently available on Amazon-On-Demand for the poultry sum of $3.99 each. I say poultry because that price is chicken feed. I just watched the episode with Martin Landau, "The Man Who Was Never Born," and it was pretty durn good. I also have had the theme song to The Blob running through my head for three weeks. It's like "Tequila," only catchier.
Oh yeah, and Burt Bacharach wrote it.

5. Keeping up with the news. It's still mostly depressing, but I feel a compulsion to stay informed. I guess it's my way of touching base with reality after a long day of playing Pinball Arcade and watching Three Stooges shorts. Twenty minutes a day though. That's all I can stomach. Favorite Mitt Romney nickname: Mittens.
6. Becoming a slot junkie. I got bit by the gambling bug last year, and have made a few trips to the only casino in my neck of the woods, Harrah's in Cherokee. Slots are always a bad bet, but I've managed to come out just a little short of even. It really is a thrill playing these games. Pooh and I enjoy the Star Trek slots, one of the (no pun intended) next generation of slots that provide an immersive experience via vibrating seats and surround sound. I briefly dallied with some online slot enterprises, but my Spidey-Sense started tingling so that's over. Could a trip to Vegas be in my future? Damn, I hope so!
7. Finding balance. This past year, I have been undergoing a process not dissimilar to maturing. I am wearing less t-shirts, staying away from foods that make my stomache ache, and appreciating jazz more and more. I had my hair cut short. I still love comics, but have developed a distaste for most of the superhero genre stuff I used to read constantly. I love a good cup of french press coffee. None of these life adjustments were pre-planned. They just happened organically. My inner child and I were duking it out for a while, but we finally reached an agreement, probably while watching Adventure Time. So, now I wear button-up shirts while taking Donkey Kong Jr. challenges.

Tomorrow: A complete comic story from the Golden Age! Plus, something else! Maybe! 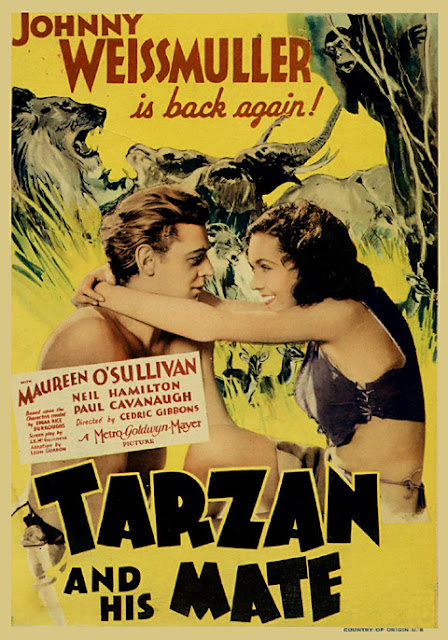 "Jungle love, it's driving me mad, it's makin' me craaazeeeeeeeee!"