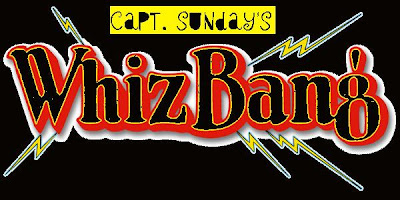 Welcome, curiosity seekers, to the premiere installment of a new feature which is more or less a stream-of-consciousness celebration of many decades of pop culture, with a special emphasis on comics! 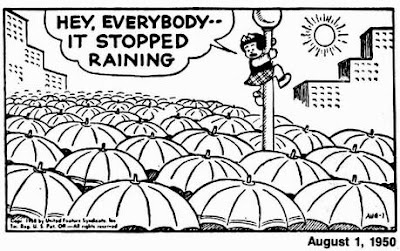 Let's kick off the proceedings with a look at the evolution of Ernie Bushmiller's brilliant (and soon to be collected in book form) strip Nancy, as originally published in Nemo: The Classic Comics Library # 30 ( April 1989). 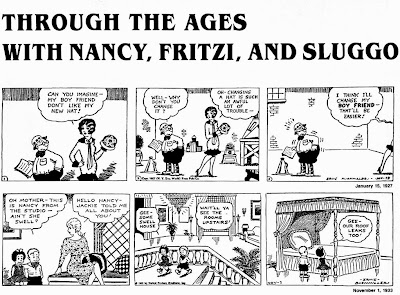 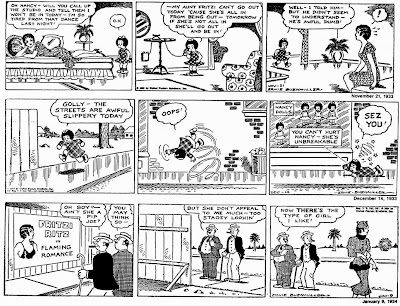 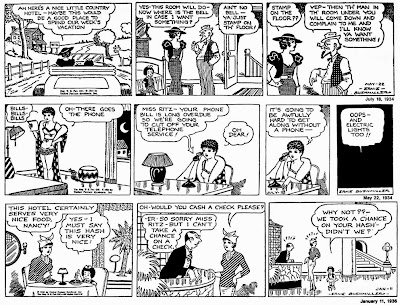 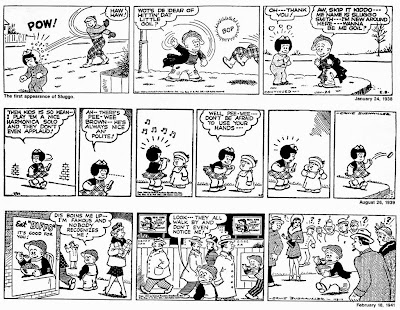 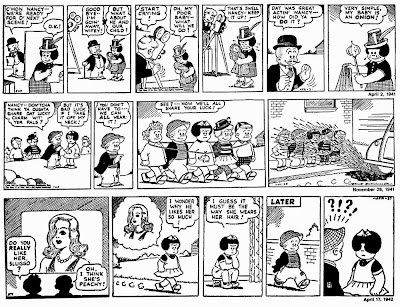 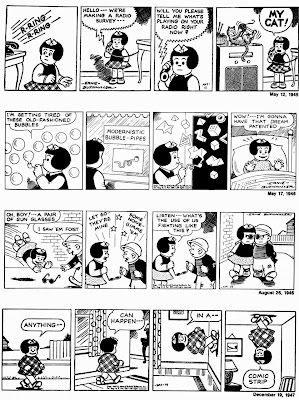 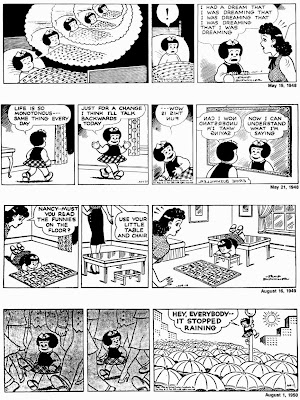 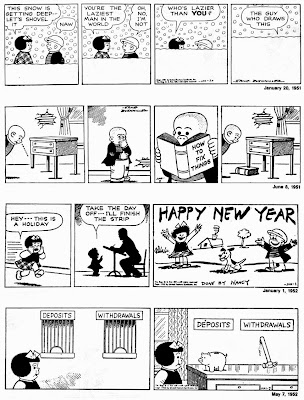 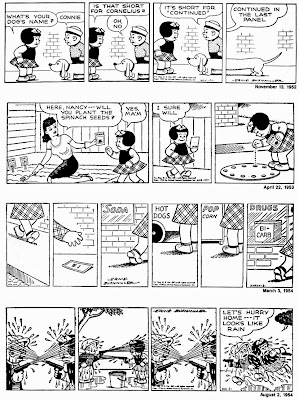 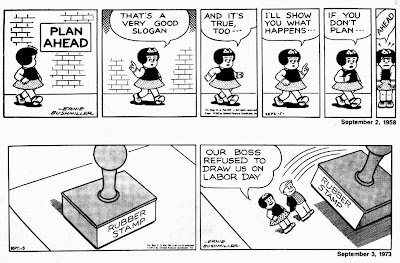 And now, a word from our sponsor... 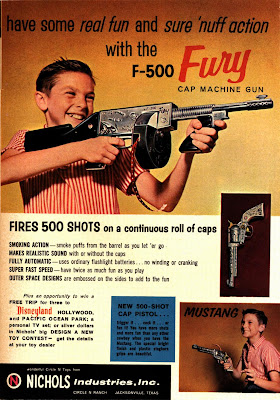 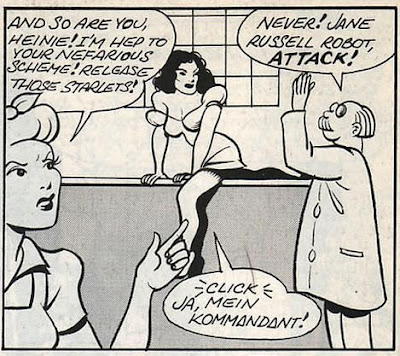 Trina Robbins was one of the most brightest female lights in the male-dominated Underground Comix movement, and her work is due for a major rediscovery. Here she weaves a humorous tale of WWII espionage featuring Rosie The Riveter. Any story with the line "Jane Russell robot, ATTACK!" has to be worth a look-see. 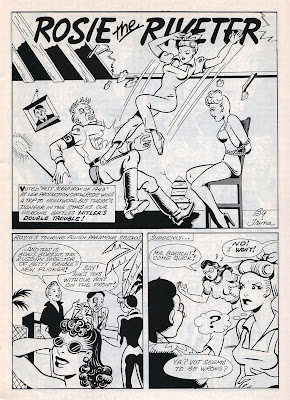 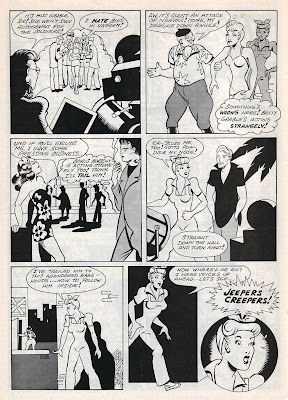 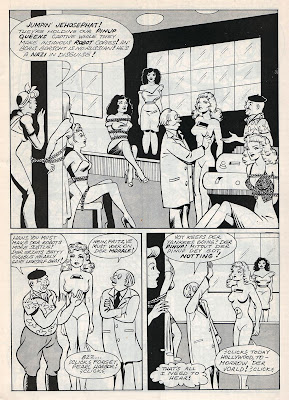 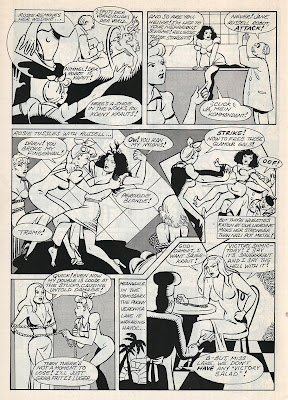 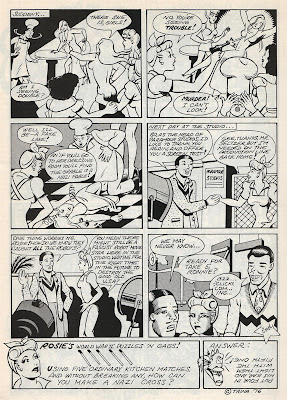 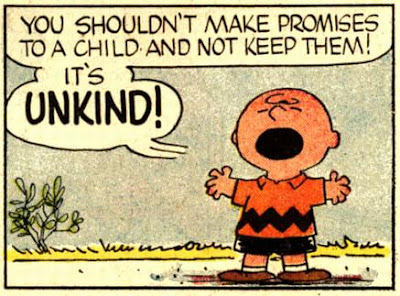 Who drew the Peanuts comic books that Dell put out in the 1950s and 60s? For a time, it was mainly a man named Dale Hale, assistant to Charles Schulz (and later writer/artist of the Flintstones and Yogi Bear daily comic strips as well as his original strip Figments, which ran for 15 years.). Dale talked with Nat Gertler about his experiences working with "Sparky" and you can read that interview here. 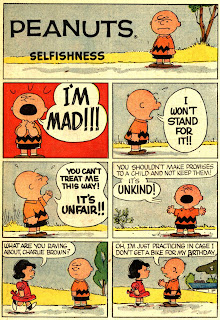 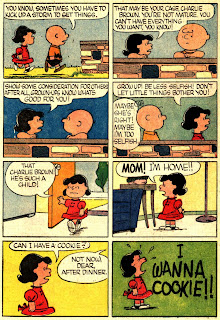 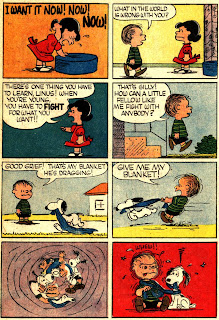 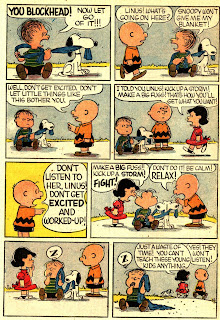 Spook Sport (1940) is an experimental animation film from Norman McLaren, a Scottish-born Canadian who developed many revolutionary techniques for synchronizing animation with music. You won't believe this cartoon is almost 70 years old. 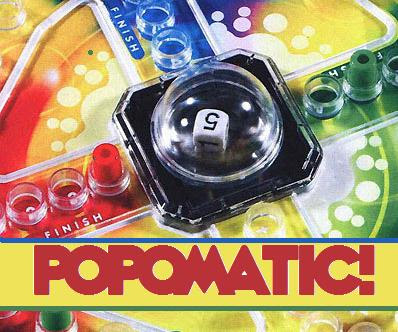 My Week In Pop Culture Land

"If art is to nourish the roots of our culture, society must set the artist free to follow his vision wherever it takes him." ~ John F. Kennedy

3. Throw Me The Statue is an indie band from Seattle who released their second album, Creaturesque, this year. The track I'm loving at the moment is the Weezer-esque "Hi Fi Goon".

4. Has it really been 20 years since Seinfeld made its debut? I recently purchased the Complete Series for Pooh, but I'm enjoying catching up with Jerry, Kramer, George, and Elaine almost as much as she is.

5. I found Persona, a somewhat experimental 1966 film from Ingmar Bergman, to be a captivating experience, and not just because of the beauty of the film's stars, Liv Ullman and Bibi Andersson.

6. Ham On Rye, a 1982 semi-autobiographical novel from Charles Bukowski, follows his alter-ego Henry Chinaski's life growing up in Hollywood during The Great Depression.

7. The first issue of DC's Blackest Night really blew me away and even creeped me out a little, especially when ( MILD SPOILER ALERT!) The Dibnys paid a surprise visit to the Hawks.

8. After catching one of the later Sidney Toler Charlie Chan movies on TV, I decided to buy the first Charlie Chan DVD collection, which features Swedish actor Warner Oland as the "amiable Chinese". I really can't decide who I like better, but this a fun series to watch.

9. I finally got around to watching Johnny Cash's America, a stirring portrait of The Man In Black that examines in detail the complex nature of one of the 20th Century's greatest troubadours.

10. The Mighty Boosh, a British import currently airing on Adult Swim is not very often laugh out loud funny, but I am attracted to the surreal nature of the series. It's almost like a cross between The Goodies, Lidsville, and The Monkees. Requires further examination.

That about wraps it up for Whiz Bang this week, Vanguardians. Have a great Sunday, don't forget to write, and keep on culturin'!