Who Was Betty Betz? 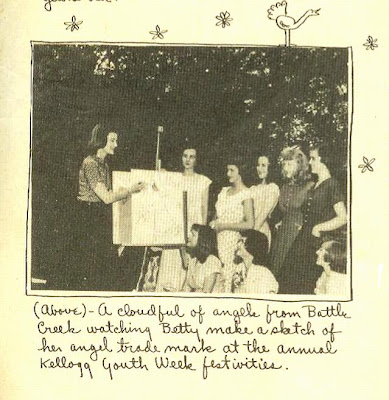 Betty Betz was a columnist, author, and cartoonist in the 40's and 50's. When she wasn't entertaining teenagers at the annual Kellogg Youth Week Festivities, she dispensed wisdom to teenagers through the pages of magazines like Seventeen, books such as Your Manners Are Showing: The Handbook Of Teen-Age Know-How, or, in this case, Four Color# 309 (Jan. 1951), featuring "Dollface and Her Gang." This was not a "gang" in the West Side Story sense of the word. They did not rumble.

Given the loutish behavior of the boys in Dollface's town, it is no wonder that she was given to suicidal thoughts occasionally. 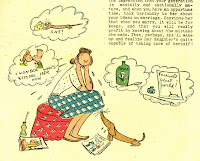 Things did not improve at the next social function...

Ouch, that had to hurt. This tragic scene makes modern teenage problems such as crystal meth addiction seem pretty silly and harmless. 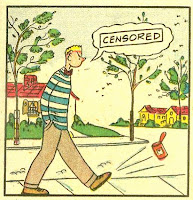 Poor Dollface. Kid can't catch a break. What she needs is a plan, a plan devised by her worldly best friend, Bun Brain. The following is just the first page of a longer story, but I think it works better as a one-pager.

Is it just me or is there something about these strips that is reminiscent of the work of Lynda Barry or maybe Aline Kominsky-Crumb? 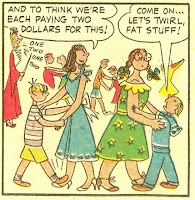 If you want to see more, check out this article at The Nervous Breakdown.

If you know what ever became of Miss Betz, spill the beans in the comments section. Enquiring minds want to know!

Betty Betz is my Grandmother,no joke. She is currently living in Bermuda. I had no idea that she wrote comics, but i know she used to write children's books. Unfortunatly she developed alteimers, but continues to paint occasionally.

Anonymous, I hope you're not just pulling my leg. If she were my grandmother, I'd be way more familiar with her work than you seem to be. I've wondered for a long time whatever happened to Betty Betz. I first discovered her when I bought a small box decorated with her art work, a box for 45 rpm records. Then I found that they were also made for 78 rpm records, so I purchased a couple of them. They were made in blue and pink. I have now become a fanatic at collecting her works. I have scrapbooks and photo albums, a diary, a letter box, jool (jewel) boxes, two books (manners, party book), box of Christmas cards, loot box, and a cannister for holding letters. All have the most marvelous illustrations. I would love to meet her and tell her how much I have enjoyed her art work.

I stumbled upon this blog by searching for an LP title: "15 minutes with Betty Betz" from 1986 by Dutch wave band, The Pin-Baskets (I live in the Netherlands). I found the album cheap and it has a cover depicting Miss Betz. On the back, there's a reproduction of a magazine article that spawned the LP title, and at the end of the album, 15 seconds of her voice can be heard (if that's really her, of course). I'm not familiar with Betty Betz's works, but I just though I'd share this.

I just finished reading an article titled "which is the greater asses to be a good speaker or a good writer?" that Betty Betz wrote for "Chrysler Events"(a little magazine) in 1952. I wanted to rewrite it... it seems so relevant for today, so I found your blog.

I have an article from the hearald american newspaper, with 'betty betz and my brother John Altiery and stanley paplaczyk.they are two heroes from the wolfhound division in the korean war. I would like to know how to find the original article and picture as mine is very faded. John was only 14 yrs old when he went to korea. 17 when he came out. If you have any idea how to find this I would love to hear from you They were from Joliet Ill.John is in rehab now he is not doing to well He would love to see this again. Thanks Beverly

Dear Anonymous,
The Stanley Paplaczyk you referenced in your note on this page is my father!! I would love to know if you knew him as he died in 1970, when i was only 10 years old. Please let me know or share any articles you may have.
Regards,

Betty Betz was my Godmother.Sadly she passed away 17th April 2010. She was a remarkable lady who achieved a great deal in her life. She suffered in her later years and became a recluse in Bermuda. I wish there were more ladies like her today.

I just found a signed Betty Betz wastebasket and knew it must be special, so I looked it up and found this! Very interesting.

Back in the 50's (I'm 71 years old) I recall books about teenage behavior by Betty Betz, hand-lettered in a wonderful loopy script. I had several of her books but have lost them. Social Security Death Index lists an 80 year old woman, Ruth D. Betz, who died 17 April 2010. Is this the right person? - I want to recover some of these books but am having trouble identifying them. - Bob Richmond in Knoxville TN, rsrichmond@gmail.com

I just lately had an ID bracelet returned to me from people who are remodeling my childhood home,and the inscription on the back says "Best Wishes from Betty Betz and "Fatso". I remembered the bracelet very well. (Things were made very well back in the 50's) it still is in the same condition as it was when I wore it as a child. I'm hoping this is the Betty Betz from whom it came. What a thrill it was to get my bracelet back. Fran

Betty Betz was my mother's best friend in high school (HHS, Hammond, Indiana). Mom, who was ordinarily shy, told a story about how she pushed a fully clothed boy into the Betz' swimming pool during a party. Apparently Betty thought it was so funny that she claimed to have done it. In 1969, Mom and I watched the Kentucky Derby. She was thrilled to recognize Betty in the winner's circle with her husband, Canadian oilman Frank McMahon.

So glad I found this blog. I',m not sure, based on the comments, who really was the REAL Betty Betz. I just know I have carried around my copy of the (one and only) Dollface and Her Gang comic since 1951 (I'm now 68). I had an older sister (who had a BB scrapbook); being a teenager looked like it would be such fun!!! I wanted to be Dollface but was probably more Bunbrain. To this day I still love ballet slippers, dachshunds and "cheese dreams". My copy is tattered nearly beyond recognition, and I do own most of her books. My only disappointment is she had a very small range. Her drawings were constantly recycled; I could pick out the same characters and poses in multiple situations. They may now seem like artful doodles, but I still love them.

I'll be honest, I didn't know who Betty Betz was before this post! Thanks!

I found a book when cleaning up at my 90 year old mother's house. The book is titled "The Betty Betz Teen-Age Cookbook" illustrated by the author. The book cover intriged me enough to look her up. I was wondering if Betty Betz was Betty Crocker's maiden name. I knew I had the right girl when I read this post. The illustrations and the page the "Best wishes from Betty Betz and Fatso". I figure that Fatso is the dachsund in the illustration in the front of the cookbook. The book was a school library book copyrighted in 1953.
Betty seemed like a very amazing woman. I am sorry to hear of her passing.

Betty was my cousin. In the early '50's she lived in Grand Beach, Michigan (right on the state line with Indiana) with her Dad, Frank, Mom Ester and sister Patricia. According to stories I've heard about her she swam competitively, possibly in the Olympics, or perhaps Olympic trials, she was a war correspondent in Korea and a fashion journalist in New York. She married Frank McMahon around 1957 and lived in Calgary for many years.

I'm saddened to hear of the difficulties she suffered late in life and of her death.

i would love to know more about this woman and write an article about her can someone please contact me.

As Fran wrote, I too have a bracelet with the same inscription on the back. Apparently someone in my family had my name engraved on the front, but I have no idea how we got the ID bracelet. I lived in California when I was very young and then moved to New York State. I'd like to find out more about Betty.

Yesterday, I found a small, card in the drawer of an antique table, which belonged to my aunt. It had angel drawings and was titled, "I am a Betty Betz angel". There is a typed paragraph on the front, (I am paraphrasing) "in this war torn world, I am a young person..." who is fortunate to have home, family, etc. I will be kind to others, value people for the right reasons, not show prejudice toward any race, religion, etc., etc. It is signed on the back by my cousin, my aunt's son, who is now in his mid eighties, with a pledge to uphold the Betty Bettz "code". At the bottom, it stated that the card is valid until the member is twenty years old. This must have been well before America's involvement in WWII, as my aunt's son was in the military in France during the Second World War. Also, he grew up in Dallas, TX.

OMG Fran! You just helped solve a mystery, sort of, and prove to be that the bracelet could be for girls. We found one of these bracelets in my father's effects, thought it was a man's style, and we weren't sure if the "fatso" engraving was to my Dad or my Dad--who was very skinny--was calling himself that and intended to give the bracelet to a girl and never did.

Betty was a war era celebrity designer and cartoonist. This is the earliest metion I found of her in Life Magazine.

My dad had one, too!

I have collected some of her books and novelties. In one of the books it is referenced that "Fatso" was the name of Betty's dog.

I would imagine the bracelet was from a fan club or something of that nature.

I have a book that belonged to Betty Betz. She loaned it to me. Please contact me if you would like to have it. dfacts@earthlink.net

What do the boxes look like? Any of them burnt wood art? I found a beautiful box with burnt wood looks like 1920s girl, signed Betty J.Betz 1989 and says "find the mouse".