King Of The Underworld 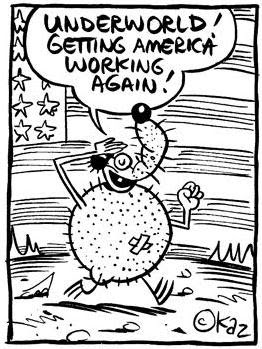 There are 5 collections of cartoonist Kaz's "cruel and unusual" comic strip, Underworld, available from Fantagraphics Books. This week I bought two, and I know the other three will be hunted and gathered soon. It's nice to get excited about modern comic strips. It doesn't happen often enough.

"Somewhere between the caverns below Popeye's Spinachovia and the sewers beneath the suburb where Ernie Bushmiller's Nancy lives is Kaz's Underworld. Like many other contemporary alternative strips it reeks of Bad Attitude but it's something of an anomaly in that it's actually Funny as Hell." Art Spiegelman

"If you enjoy laughing at the humiliation and suffering of cartoon characters (as I do) then Underworld is for you." Dan Clowes

"If Peanuts creator Charles Schulz had been brought up in a trailer park in Utah, those warm hearted Snoopy strips would have looked something like this." The List, UK

"Though Kaz may dent your brain pan and monkey with your jugular for kicks, it's the funny bone that is the ultimate target." Liam Keansburg