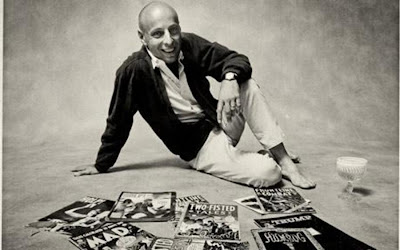 Maybe it's because Halloween is just around the corner, but I am absolutely convinced ( wink wink) that Harvey Kurtzman's ghost is following me around, as evidenced by the three random encounters I had with him last week.

It all started last Sunday morning when, week's labor done, I stretched out on my bed and gingerly opened the wonderful new book, The Toon Treasury Of Classic Children's Comics. Edited by Art Spiegelman & Francoise Mouly, this baby is chock full of the kind of comics I wish were still being produced for kids of all ages today, by creators such as my main man Sheldon Mayer, Carl Barks, Walt Kelly, and, of course, Harvey Kurtzman, who is represented by his "Egghead Doodle" and "Hey Look!" strips. If you love the comic book medium at all, you either already have this book or are rapidly saving your lunch money to acquire a copy. It smells nice too. While we're on the subject, you can find more wonderful kid-friendly comics on the new blog called, appropriately enough, The Big Blog Of Kids' Comics! 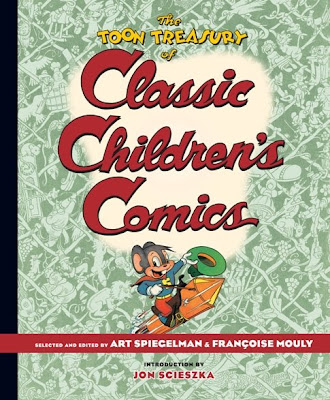 The next evening, Pooh Bear and I sat down to watch the the first installment of Monty Python's latest final rip-off (they really mean it for sure this time!, Part XVI), "Monty Python: Almost The Truth: The Lawyer's Cut" and I was a bit startled when Terry Gilliam started talking about, you guessed it, Harvey. It seems Kurtzman had given Gilliam one of his first pro assignments, working as an editor on the magazine Help! after seeing Terry's Kurtzman-inspired revamp of Fang!, his college publication. In fact, it was at Help! that Gilliam first crossed paths with John Cleese, who was recruited to star in one of the magazines oft-featured fumetti bits. 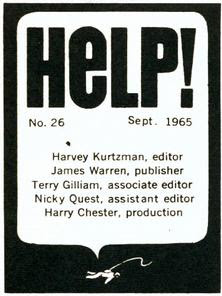 A few days later, I stopped by Wal-Mart, stop two in what would eventually be a four destination search for the elusive new Plastic Man dvd collection ( more on that later). I failed to find Plas, but my eyes were drawn to the affordably priced reissue of Rankin Bass' 1967 classic, Mad Monster Party. I had lost my previous copy in what I refer to, starting now, as "The Great DVD Sacrifice of Ought Eight." Imagine my surprise when, while scanning the credits on the back, I came across the name of...Harvey Kurtzman. Yes, he was one-third of the screenplay team, the others being Len Korobkin and Forrest J. Ackerman. Here, watch the trailer while my chill bumps go down.

The only conclusion I can draw by this string of coincidences is that Kurtzman wants to see more of his work spotlighted here on Easily Mused, to remind folks that he had a hand in a lot of things that are now considered classic. So if you see a lot more Kurtzman work around these parts, remember, I didn't choose him, he chose me.

Since my other current obsession is The Beatles: Rock Band, here's master satirist Kurtzman's first take on The Fab Four ( or as he calls 'em, "The Bleatles"), in a 1965 Little Annie Fanny strip, featuring "a little help from his friends" Will Elder, Russ Heath, and Al Jaffee. It's gear, far out, and groovy, but that Annie chick has a nice set of bazooms, so if you are easily offended, please shield your eyes whilst reading. Ok, Harvey, satisfied??? Oh... right, thanks. I forgot to mention that you can feast your eyes on more Kurtzman treasures in Denis Kitchen and Paul Buhle's recently published 256 page hardcover, The Art Of Harvey Kurtzman: The Mad Genius Of Comics. I haven't read it yet, but I feel compelled to order it soon. B(h)oo Hah! 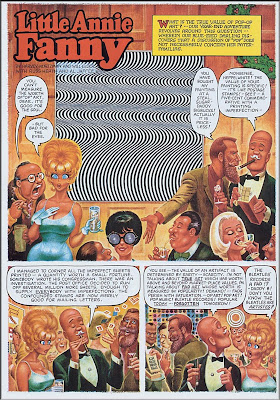 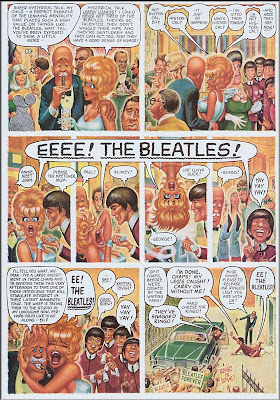 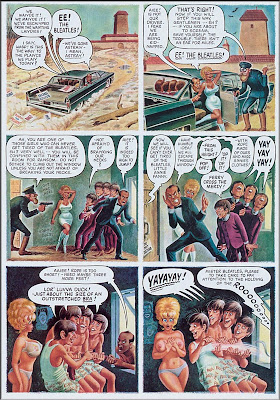 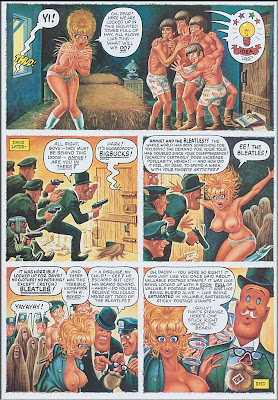