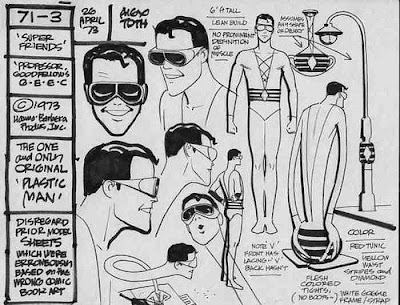 Yesterday saw the release of Plastic Man: The Complete Collection, a 4-Disc DVD set from Warner Home Video featuring the original 35 episodes of Ruby-Spears' Plastic Man Comedy/Adventure Show. I was six when this show debuted in 1979, and I remember it as one of the first Saturday Morning Cartoons that captured my fertile imagination. Even at that young age, I realized I would never fly like a bird or a plane or Superman. Stretching, however, was completely feasible. I'm sure at some point while watching this show, the spoon I used to gobble up my Sugar Smacks or Apple Jacks must have slipped from my grubby little fingers onto the chartreuse deep-pile carpet. At this point, I would have utilized this remarkable superpower to help me retrieve it, probably with only seconds to spare before the global death ray would have been triggered, destroying all mankind! Those of you who are Saturday Morning veterans, you'll understand.

One of the great things about this series is that it featured the voice talents of Michael Bell, who is certainly on the short list of great voice actors ever. Toon Zone reporter Xum Yukinori has just posted a lively interview with Mr. Bell and it offers more than a glimpse into the world of cartoon voiceovers, then and now.

For more Plastic Man coolness, pay a visit to Plastic Man Platitudes, a site dedicated to all things Eel O'Brian, including some nifty fan art.

Of course, the source for all this excitement is the late great Jack Cole, a man whose life and work ( including many Golden Age Plastic Man comic scans) is the constant focus of Paul Tumey's excellent blog, Cole's Comics.

If I might humbly add, I posted the Plastic Man tale from Police Comics #77 (April 1948) in January and you can find that tale, featuring the villainy of a chap named Skullface, right here.

It should be noted that the wonderful Alex Toth designed header at the top of this entry is not associated with the Ruby-Spears' series at all. It is a model sheet for the Hanna-Barbera 1973 Superfriends series in which Plas had a rather lame one episode cameo, retrieving a mouse from the inside of a computer. Still, any excuse to display Toth art works for me!

All but the most fervent completists should be okay with the new DVD collection's omission of the mildly entertaining Baby Plas and Plastic Family segments from the later seasons. These were all conveniently posted on YouTube but have recently "mysteriously vanished," except this one, which I will predict will also "mysteriously vanish" real soon, so view it now, or perhaps never.

I have vague childhood memories of Plastic Man. I don’t think I got to see very many episodes. I remember him and a guy in a Hawaiian shirt being trapped in a giant honeycomb.

Plastic Man is one of those shows I’m afraid to watch again in case it’s not as good as it was when I was little. I was recently disappointed when I found Drak Pack--which had previously been something of a Holy Grail, since my father almost never let me watch it--on YouTube.

Many thanks for the nice plus on your blog to Cole's Comics - my blog about Jack Cole (creator of Plastic Man). I don't know how I missed your blog, but I am mightily impressed at the breadth and depth of your knowledge of cool stuff! I put a link to it in the 'Woozy Links" section of my blog.