Don't Be A Yule Fool! 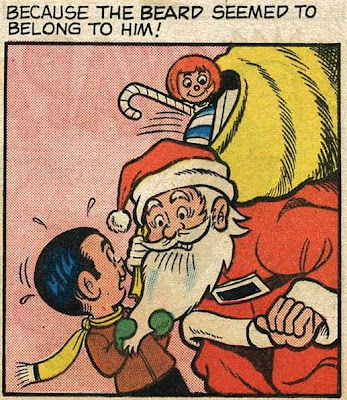 Bob Bolling is the name that springs to mind when discussing Little Archie, but today I am shining a light on another creator who put his own stamp on the series. Dexter Taylor, a friend of Bolling, began contributing stories for Little Archie as far back as issue #4. After this holiday themed tale (written in rhyme), you can read an article about Taylor which appeared in the Palm Beach Post in 2008. It must have been quite a challenge for Taylor to emulate the style of Bob Bolling, but Taylor pulled it off very well. Kudos and wishes for a happy holiday to you, Mr. Taylor! 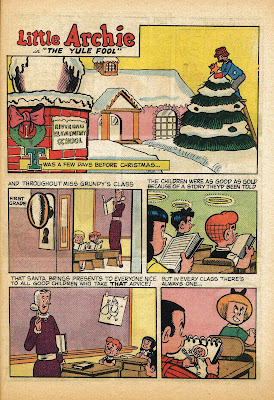 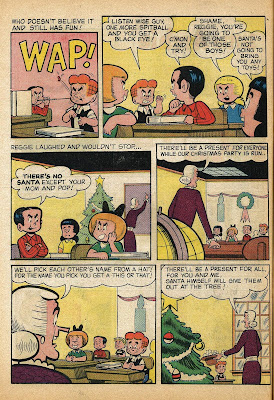 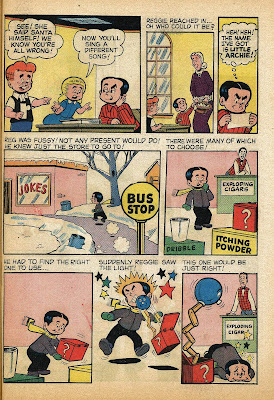 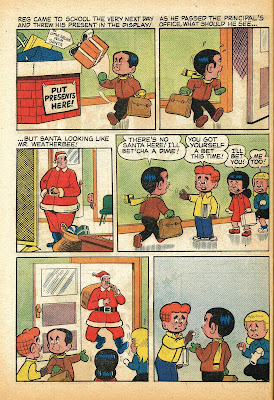 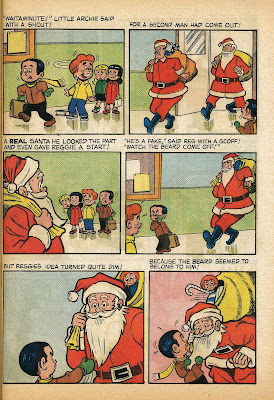 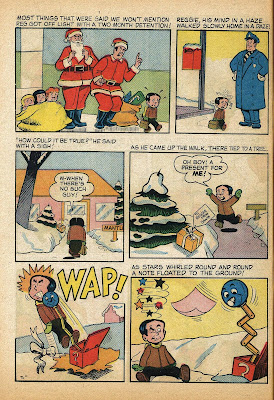 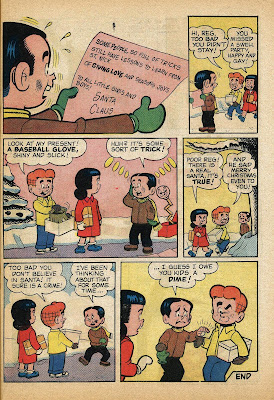 Saturday, May 03, 2008 - Dexter Taylor began drawing when he was 5 years old - sketching on paper and grocery bags at every turn, using anything he could find that would hold a pencil line.

He would copy the popular comic strips of the day and make up his own cartoons.

"My family moved around a lot, so it was a good way for me to get to know other kids in new places," said the Riviera Beach resident. "I've always wanted to be a cartoonist."

It turns out, his early dream has worked out just fine. Taylor, 77, has been writing and drawing stories for Archie Comics for more than 50 years and still works for the company each month.

For almost all of his career at Archie Comics, Taylor has guided the tales of Little Archie, a preteen version of the redheaded comic-book icon. Along with friend and fellow cartoonist Bob Bolling, Taylor has been writing and drawing Little Archie stories since the late 1950s.

A second volume of stories by both Taylor and Bolling, The Adventures of Little Archie, was published recently.

After high school and a short stint at a Boston art college, Taylor landed an entry-level job at Archie Comics in 1954, doing production work on Archie's Mechanics. The comic book, which featured the Archie characters working on cars and other Popular Science-type projects, lasted only three issues and commands collector prices topping $1,000 these days.

At Archie, Taylor met Bolling, who'd also just started at the company, and they became roommates and friends. Taylor's break came in 1956, when Bolling was picked to write and draw the Little Archie comic book.

The company then took what was then considered a gamble on introducing another Archie comic into the marketplace turned out to be a huge success. The first issues sold millions of copies, and readers demanded more stories about the young Riverdale gang.

With Issue No. 3, Archie Comics made a bold move and changed Little Archie from a regular 10-cent comic book to a larger 25-cent quarterly with more than 80 pages.

Bolling couldn't write and draw all the stories, so the company recruited other house artists to pitch in. Taylor was one of them.

His first Little Archie story appeared in Issue No. 4, and he hasn't let up since.

"But I needed a lot of help at first in getting the drawing right and the stories to fit the formula," he said. "Bob Bolling was a great help, and an artist by the name of Bob White constantly helped me correct problems."

Taylor kept doing the stories, sometimes to the tune of three or four an issue. He and Bolling not only did the typical Archie Comics gag stories but also filled the book with tales of adventure and mystery. Little Archie solved crimes, fought bullies at school, made friends with a pair of misguided Martians and fought his arch-enemy, Mad Doctor Doom and his sidekick, Chester.

Bolling soon went on to draw "big Archie" stories, and Taylor took over the entire book - doing the covers, and both writing and penciling the stories. Often, someone else would ink Taylor's work to give him time to do the main chores. "I got better at doing Little Archie, and I think the people at Archie thought I could handle it," he said.

Cartoonist Scott Shaw of San Diego, Calif., lauds the smooth transition from the Bolling stories to Taylor's handling of the character. "The posing, expressions and especially Dexter's writing made you believe that these really were the familiar teenage characters in their childhood," Shaw said.

Little Archie survived in his own comic book until 1983. But he has been featured in the various Archie Comics digests, which Taylor continues to work on.

Longtime Archie collector Jack Copley of Orlando thinks the stories with a lesson were one of the reasons Little Archie was so popular.

"Little Archie was the Leave it to Beaver of comic books: wholesome stories the whole family could enjoy, often with lessons to be learned - and Dexter often had a clever ending," Copley said.

"Dexter's ability to consistently draw the same core characters month in and month out for over 20 years, maintaining quality and ingenuity, should not be overlooked," he added. "It's difficult for (artists) to keep themselves interested in their work when they have to stare at the dreaded 'blank page' each morning."

When asked which is more difficult, writing or drawing a comic-book story, Taylor said: "Sometimes, the writing comes really easy, and sometimes, the art comes easy. There isn't a set answer to that."

In 2005, Taylor and Bolling were guests of the Comic-Con International at San Diego, where they were wined and dined by fans and awarded the prestigious Ink Pot award for their contributions to the art form.

"That was really special," Taylor said.

Taylor and his wife, Jackie, came down to Florida to live in 1994, choosing their Riviera Beach home so they could be near one of their daughters, who had previous moved to Jupiter. Their second daughter soon followed and lives in Palm Beach Gardens. Their son still works in New Jersey. They have 10 grandchildren.

One reason Florida weather suits the Taylor family is their love of swimming. All three of their children swam competitively when they were younger, achieving All-America status. Taylor helped coach them and still gets in his regular laps at the community pool. Naturally, the swimming bug has been passed on to their grandchildren, as well.

"Oh, I still love to sit down and write and draw Little Archie stories," he said. "I'll keep doing them for as long as they want me to."
Posted by John Glenn Taylor
Email ThisBlogThis!Share to TwitterShare to FacebookShare to Pinterest

Jaime J. Weinman said...
This comment has been removed by the author.
December 23, 2009

Thanks for this. I had kind of a love/hate relationship with Taylor because he continued on the title after Bolling was re-assigned, and Taylor was ordered by his editors to incorporate stuff from the big comics: Fangs Fogarty became a clone of Moose, Little Archie was getting "dates" with Veronica, even "little Pureheart the Powerful." It's not his fault that the title was dumbed down, but he was the one doing those stories.

As a little kid, I liked these stories better than the early ones because they were exactly like "big" Archie (which means the retool worked) but soon I realized that they weren't very good, and this became even clearer when Bolling came back to Little Archie in 1979, and his stories were appearing in otherwise all-Taylor issues. Also Taylor had a habit of remaking big Archie stories with Little Archie.

But in the original 38 Little Archie issues, Taylor's stuff could be very good and really helped the comic by providing a more "earthbound" contrast to Bolling. Bolling did (mostly) long stories, often large-scale, with his distinctively melancholy humor. Taylor did most of the shorter stories, more upbeat and lighthearted stories, and even his adventure stories were a bit more realistic than Bolling's.

Also, the young Taylor did some really interesting gimmick stories. The rhyme one above is one of his best, and he also did a ton of pantomime stories, including one story that's nine pages of pantomime followed by one panel of dialogue.