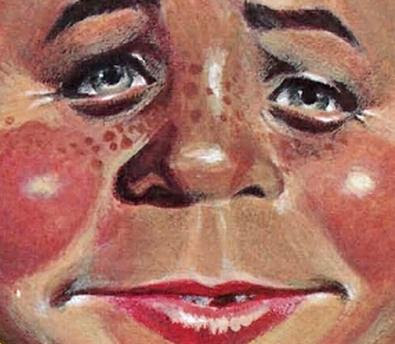 Easily Mused viewer BEMaven liked John Severin's tribute to Don "Squibbetyflip" Martin. He thought it was "much better than the lame jab once made at Don Martin by National Lampoon." While I agree that the DM take-off is probably the weakest part of NatLamp's infamous Mad Parody, I have to cringe a bit when the word "lame" is used in the same sentence with the early years of the funniest satire mag ever produced.

These days, National Lampoon is but a shadow of it's former self, lending it's once vaunted name to projects that should never see the light of day. In it's prime, however, geniuses like Henry Beard, John Hughes, Michael O'Donoghue, Doug Kenney, and P.J. O' Rourke (to name but a few) meticulously constructed the best parodies ever put in print.

The Mad parody you are about to view is a savage skewering of a magazine that is near and dear to many hearts, including mine, and it couldn't be any funnier. Using Mad's regular features against them, the NatLampers mercilessly portray the mag as long in the tooth and irrelevant. To some extent, Mad had become somewhat formulaic by the time this article appeared in the October 1971 issue of National Lampoon, but I also keep in mind that the same people who wrote and illustrated this piece undoubtedly drew a lot of their comic consciousness from The Usual Gang Of Idiots, so in a sense this reads like a roast, all in good fun. 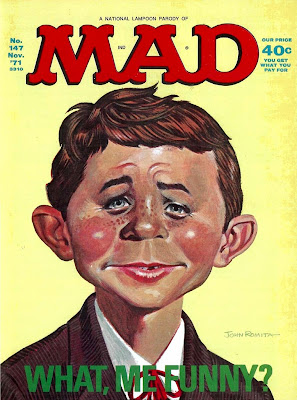 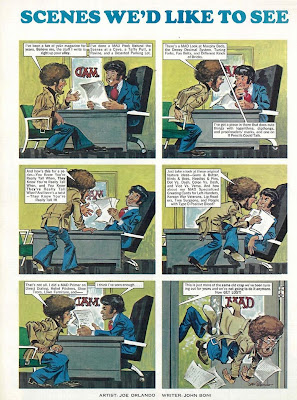 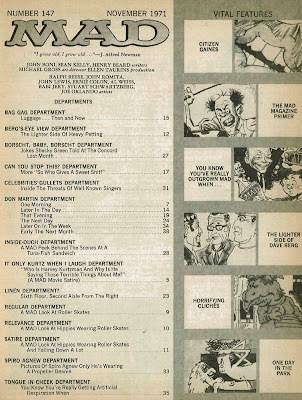 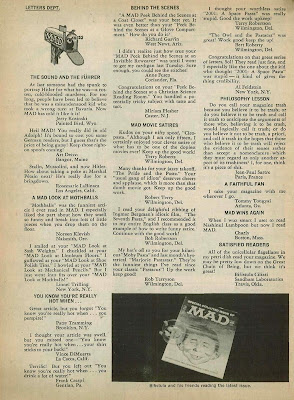 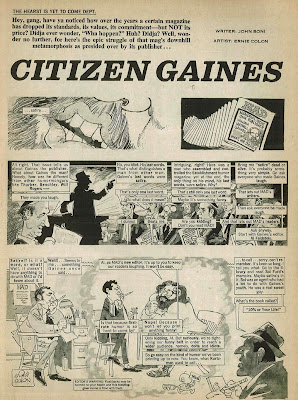 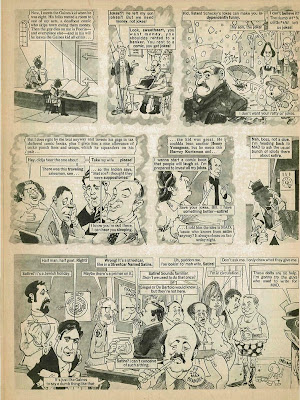 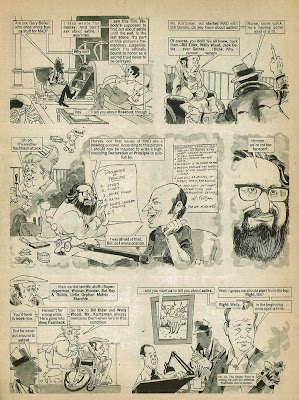 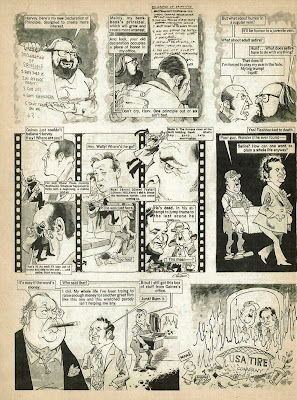 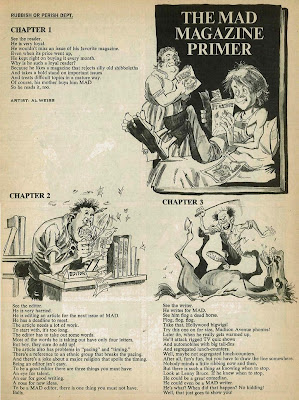 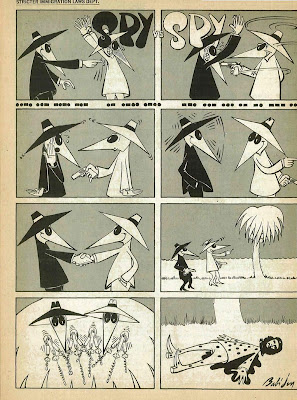 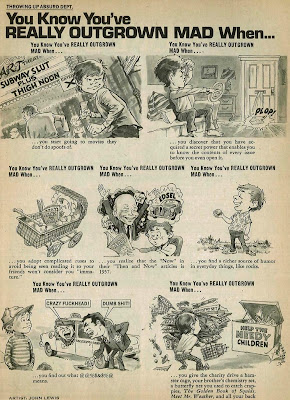 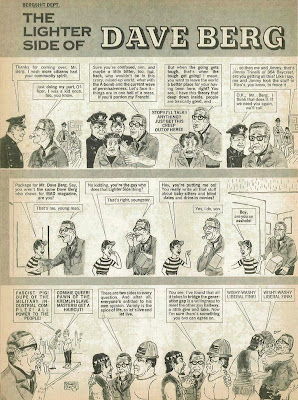 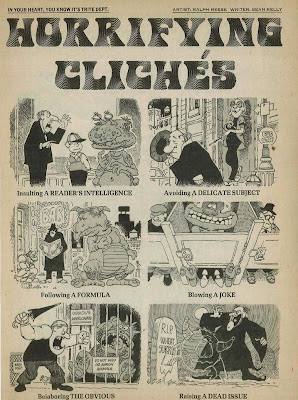 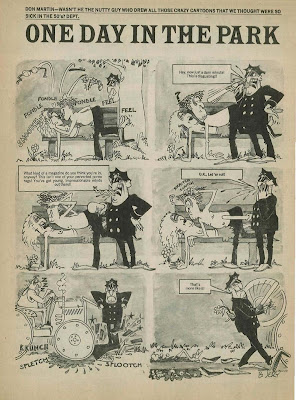 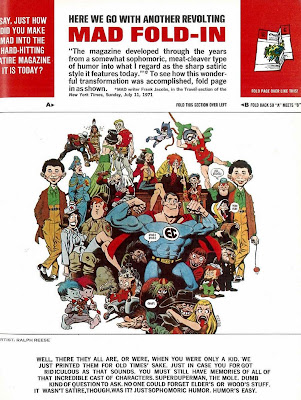 The first Lampoon I ever bought (Back To College issue) b/c of this MAD parody. And then I got "hooked." Loved "The Lighter Side of Dave Berg"
Thanks for posting this.

HooHah! I wasn't even sure anyone remembered the Mad parody from National Lampoon.

Having seen the Don Martin treatment again, I stand by my original verdict: it missed the mark in terms of both content and style. And so did their Spy vs. Spy parody.

For me, each issue of Lampoon was a mixed bag: truly hilarious material on one page, then sorry drivel on the next. Working with minimal censorship made it too easy for the magazine to use crudity in place of wit. And the current incarnation of Mad seems intent on following their example.

Harvard Lampoon (the springboard for most of NL's contributors) did a more satisfying job with their parodies of major publications like People, Time, and the Wall Street Journal.

Thanks for posting. Biggest laugh I got was the Morse Code message in Spy vs. Spy (note, gusano is a Cuban derogatory term for someone who has fled Cuba).

Just in case you're curious, I went ahead and used this as a springboard to go article-by-article for an article of my own... thanks so much for posting this!

What's funny about this is that Joe Orlando actually worked for MAD in the late 1950's!

nice if you had mentioned the art direction by Michael Gross, who selected the artists that pulled off each page so well.

Whenever people ask me, how come I know so much about New York and Judaism, and I come from neither, I give 'em the same 2 word answer:

Not to worry, 5/08... Michael Gross gives himself enough credit to last a lifetime.

Sorry, I just do NOT find a word of this 'parody' of MAD to be even remotely humorous. National Lampoon mostly fell flat on it's face for me, personally, in that they seemed to think that mean spirited insults mixed with a dose of four letter words equaled 'humor'...I think MAD was far more clever, insightful and amusing, overall, and this weak 'parody' from NL solidifies that stance.

Boy, are you an asshole!

At least MAD knew when it was time to stop putting their name on crappy movies...

An uneven parody but hits some bullseyes. Kurtzman/Elder/Wood/Davis Mad = GENIUS. After those guys left it rapidly became ... LAME.

My question is, how do you do the fold-in online?

Ex English teacher here: Even though "it's" comes up first on the spelling bar, It's means "it is." "Its" is the proper spelling when the word is used as a possessive pronoun, just like "hers, his, and theirs."

There was a pleasant, big, odd dealer named Dave Gibson at early Comic Con who sold psychedelic posters. Really nice guy who sounded like Andy Devine. I heard that Dave was at a small comic con in Los Angeles and one of the guests was Dave Berg. Gibson walks up to where Berg is signing copies of Mad for fans and says in an uncharacteristically loud voice, "You aren't the same Dave Berg who draws for Mad Magazine, are you?" Berg seems to play right along, "Yes, that's me." So Gibson continues, "No kidding, you're the guy who does the Lighter Side?" Now he's got everyone's attention within earshot. "Yes, that's my regular piece," replies Berg. "You're kidding, you do all of those cartoons about baby sitters and drive-in movies?" "Yes, I do," says Berg, proudly. "Boy are you an asshole!" Gibson bellows, slapping his knees, laughing and wheezing. Berg was so pissed off, fans held him back from punching poor Gibson. Gibson had assumed, as anyone naturally would, that the recently published piece would be well known to everyone who worked at Mad, but what had really happened was that the piece was so humiliating that nobody brought a copy in to the offices at Mad, and Dave Berg, being the unfunny square that he was, had never even seen it. Gibson had thought that Berg was playing along, but Berg was simply being the person he really was. The National Lampoon parody was dead-on.