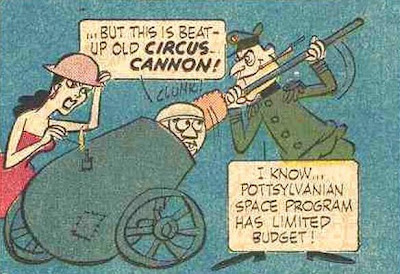 This morning I set out to fulfill an earlier promise I had made to post some actual Al Kilgore art but was sidetracked by a bit of a mystery. You see, I was seeking verification for a Kilgore tale that appeared in Gold Key's Rocky and his Fiendish Friends #1 when I saw a credit (submitted by Karl Wilcox) attributing a Boris and Natasha 5-pager in that same issue to none other but Sergio Aragonés.

The more I pored over that tale, the more I believed it to be Sergio's work. Here is one detail that seems to bear his mark: 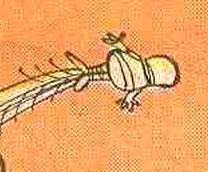 In 1962, he decided to try his luck in America, and arrived in New York with only twenty dollars and a folder bulging with his cartoon work. At first, work was slow in coming and what he did sell didn't pay very well, forcing him to work as a singer/poet in Greenwich Village restaurants and to pick up other odd jobs.

Rocky and His Fiendish Friends #1 is cover dated October 1962, so this story could conceivably be an example of the work that was "slow in coming." If this is Sergio's art, it predates his Mad debut by quite a few months and might be one of his first efforts published in America, although he had been selling professionally to Mexican publications since around 1954.

His first Mad piece, "A MAD Look at the U.S. Space Effort", appeared in Mad #76 (January 1963). That piece and the Boris and Natasha piece both revolve around the space program. Intriguing.

It's only speculation, but perhaps Sergio chose the space program as the subject of the Mad article because he had done research on the space program for the B&N story. That's assuming Sergio DID the B&N story, and since only one person (Karl Wilcox) has made that assertation, I can only say it's a definite maybe.

UPDATE! Through direct contact with Sergio, multiple credible sources now confirm that this story was not drawn by Mad's Marginal Master after all! If you need a fix of Sergio awesomeness, I can refer you to this new 272 page book which is filled to the brim with, as is stated on the cover, "Five Decades of His Finest Works!" Viva Sergio! 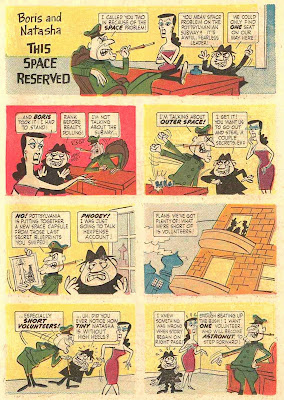 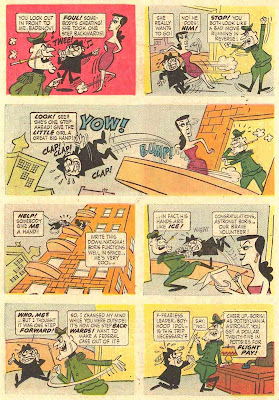 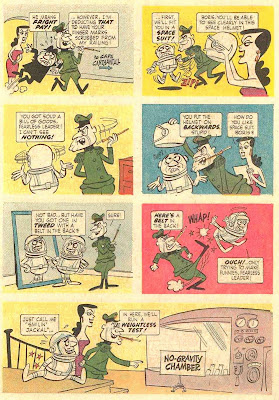 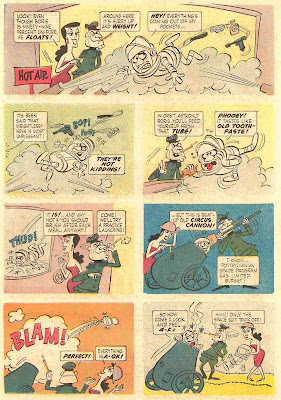 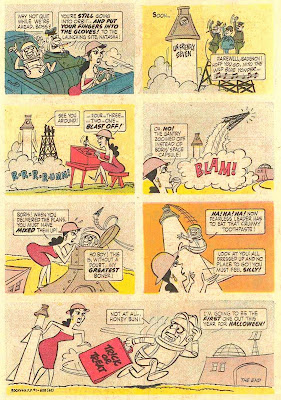 It's That Nosy Dame! -- chrismartindeed said...

Much as I admire Aragonés for his witty work with Mad Magazine and Groo, his style veers a just little too close to one of the standardized methods for rendering in comics.

Hands and feet are depicted as blobs. Props and interiors are constructed casually. And the weight of the line strokes seldom varies.

Aragonés may have very well have drawn this story... but the artistic differences between this and other Gold Key stories I've examined are too subtle to discern.

Has anyone bothered to contact Sergio? He could tell you if he did it.

I got confirmation from Scott Shaw! who asked Sergio personally, that he did not draw this. Here's Scott's actual reply:

"Sergio confirms that he never did any work for Western Publishing, although ROCKY AND HIS FIENDISH FRIENDS and related titles were done out of their New York offices.