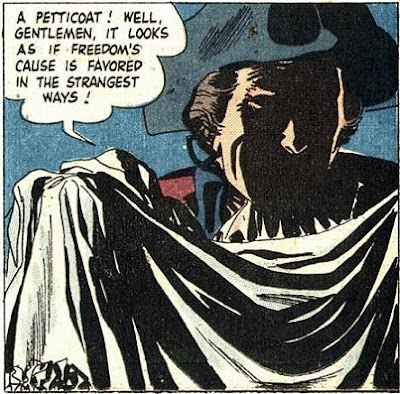 My patriotic spirit was rejuvenated by Alex Toth's depiction of the story of Paul Revere and the American Revolution, which I read for the first time today. Every panel is framed and executed with his expert eye for detail. His masterful use of negative space, taken by itself, is enough to make a fan like me drool. Had Toth not been a graphic artist, he would have been one hell of a movie director or cinematographer.

"Paul Revere's Ride" is from Four Color #822 (August 1957, Dell). It may have been scripted by Del Connell, the same guy who wrote the first Super Goof story, if you find those sort of connections fascinating.

When an American says that he loves his country, he means not only that he loves the New England hills, the prairies glistening in the sun, the wide and rising plains, the great mountains, and the sea. He means that he loves an inner air, an inner light in which freedom lives and in which a man can draw the breath of self-respect. ~Adlai Stevenson


Love your country. Your country is the land where your parents sleep, where is spoken that language in which the chosen of your heart, blushing, whispered the first word of love; it is the home that God has given you that by striving to perfect yourselves therein you may prepare to ascend to him. ~Giuseppe Mazzini


There are those, I know, who will say that the liberation of humanity, the freedom of man and mind, is nothing but a dream. They are right. It is the American dream. ~Archibald MacLeish
Posted by John Glenn Taylor
Email ThisBlogThis!Share to TwitterShare to FacebookShare to Pinterest

One of Toth's BEST stories for Dell, and that's saying a lot, if
you look at all he did for that
company. He seemed especially inspired on this story, whether
because of the patriotic subject
and/or the quality of the script.
Toth always seemed to do his best
work when the writer did HIS best
work!