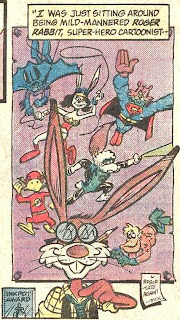 Great Caesar's Goat! Am I dreaming or has this humble blog been visited by the one and only Scott Shaw!? Let the gushing begin!

For those of you who have never heard of this man and his work, kindly lift up the rock you are living under and check out Scott's awesome resume! Kinda makes you drool, doesn't it?

With no offense meant to any of the creators whose work I spotlight here, my affection for Scott Shaw!'s art knows no bounds. It's a more personal connection than my reverence for the work of Sheldon Mayer , Walt Kelly, or practically any other artist, in any genre. Quite simply, Scott is the artist who made me want to be an artist too.

Like most children, I liked to draw and had been doing so long before I discovered Scott's work, but when I first laid eyes on Captain Carrot, drawing went from being rainy day fun to a driving passion. I can still remember with absolute clarity the day my third grade buddy Danny
reached into his backpack and showed me his copy of CCAHAZC# 1. Although the concept of "funny animal super-hero" was not new, it was new to me, and it thrilled and inspired me.

It wasn't very long before I created my own gang of funny animals, the not-so-cleverly-titled Animal Kids, with oh-so-corny names like Jack Rabbit, Beary Cub, and Mortimer Mouse. I had to have a funny animal super hero in this group. His name was Plastic Bunny.

Eventually, I transferred my creative passions to music and although I like to joke that I am the Emily Dickinson of songwriters (all of my songs will be discovered in an attic after my death), I have made a decent living as a musician. It's also worth noting that I met the future mother of my two amazing daughters while working a gig. If I had become a plumber or an architect, they would not exist.

Isn't it amazing how a cartoonist living in California can inspire a kid from North Carolina to use his imagination, leading him down a road of creativity that leads to him playing a gig at a piano bar where he meets a nurse from Alabama who will become the mother of his two incredible children? We're all connected, folks.

Scott, if you read this, thanks for stopping by, and if I'm ever in California, I hope you will let me take you to lunch.

Don't forget, Vanguardians, Scott is also the mastermind behind Oddball Comics, a weekly look at the weirdest funnies ever foisted on humankind.
Posted by John Glenn Taylor
Email ThisBlogThis!Share to TwitterShare to FacebookShare to Pinterest