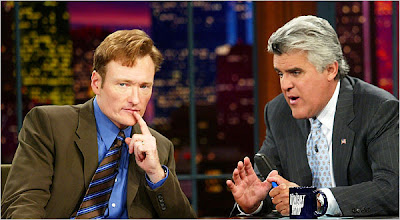 My flu didn't keep me from staying glued to the whole Conan/Jay train wreck. This was quite a spectacle. My thoughts:

It's hard for me to believe that Conan, in his contract negotiations in 2004, gave NBC the ultimatum: "Give me The Tonight Show in 5 years or I'm done with NBC." If Conan did do that, it was a serious, and unattractively egotistical, mistake on his part.

The decision for Jay to leave the show should have been made by Jay alone, given the fact that his Tonight Show had been successful. Johnny Carson hosted The Tonight Show for 30 years. 2009 marked Jay's 18th year hosting. If Jay desired to host until his 20th, 25th, or 30th Anniversary, as long as he was winning the time slot, he had earned the right to make that call. I don't think he would have wanted to try to make it to his 30th Anniversary, because that would make him 72 years old. Of course, I understand that Jay is quite the workaholic, so you never know...

NBC should have come to Jay and said " Is it possible that you can come to a conclusion about what year you want to step down?" Johnny was 66 when he retired. If Jay were to have retired on his 25th anniversary in 2017, he would be about the same age. If Conan was unwilling to wait an extra 8 years to land the most prestigious job in all of network television, then NBC should have let him go.

On the other hand, if Conan took over in 2017, he would have been 54 years old, and there's no chance that run could last 30 years, or 25, or even 15. But there is no law that states that every host of The Tonight Show gets 30 years, or 25, or even 15. The only "law" of tv is this: "If your show is successful and we're making money, you get to keep your show until you retire or stop being successful." Obviously, NBC forgot this rule in a greedy attempt to have the best of all possible worlds.

Why would NBC try so hard to appease Conan when Jay was winning his time slot against Letterman? Obviously, Jay had the numbers, ah, but the demographics...there's the rub. I'd bet anything Conan is more popular with that most desirable pie slice, the coveted 18-24 age group. They perhaps figured that putting the young guy in The Tonight Show would increase their ad revenues significantly. Not bad thinking, but they lacked the courage of their convictions. NBC had the cahones to eject Jay, but they couldn't stomach the unexpected ratings slide that they should have predicted would happen, at least in the short term, as Jay's loyalists tuned out.

Conan deserved at least 18 months to build his Tonight Show audience. And he deserved to be able to do it without having to follow Jay's 10 O'Clock Tonight Show. And let's face it, that's what it was. For 7 months, NBC tried to convince the public that two Tonight Shows were better than one. Guess what? Not so much.

Now, I must state at this point that I stopped watching The Tonight Show after Johnny retired. Jay puts on a decent show, but the vibe is totally different. Johnny was a master at all the components that made his Tonight Show popular. He made every guest feel special, his timing was impeccable, and he could draw laughter from a turnip, which many of his one-liners turned out to be. No matter what a shitty day I might have had, Johnny turned it upside down with a smile, a joke, and a turban. Johnny was a magician. I felt as if he was actively involved in making my life better. The bully would take my lunch money, I'd slip in a mud puddle, and my cat would die. Then Johnny would walk through a curtain and seem to say, "Forget all that crap, kid. Look, I've got a bird taking a dump on my head. Live a little. You're only here once." It's not Jay's fault that he never captured that essence of Johnny. No one could. Or so I thought.

During Conan's last two weeks, I saw a glimpse of that essence again. The way Conan was humorously slinging barbs at his bosses was exactly the kind of thing Johnny would do. Pull no punches, as long as it's funny. There is a fine line there, and Coco walked it with ease. On his last show, he stared straight at us and said "don't be cynical" and I again felt Johnny's presence, the humanity that colored all of his performances.

I wish Jay luck in trying to recapture his audience, but I don't think it's going to work. Too much has changed now. He is damaged goods, seen as somewhat of a villain though he's really not.

I predict great things from Conan if he continues to desire a late night show, as long as he remembers what he learned in the last few weeks. Show your humanity and don't be afraid to skewer sacred cows, the bigger the better. And stay humble.

NBC, what can I say? That peacock is looking like a turkey. Why don't you go back to basics? Go back and watch your 70's and 80's programming. Find your own humanity. Stop being so calculating. Have faith in the most promising talents. Stop cloning successful shows. Be original. Have integrity. Live a little. Every comedy doesn't have to be a snark fest. Every other show doesn't have to be a reality show. I'd rather watch faded vhs copies of Bloopers and Practical Jokes than almost anything you are showing me right now. Demographics can burn. Stop entertaining numbers on a flow chart and start entertaining real people.

And bring back Diff'rent Strokes. Coleman needs our help!
Posted by John Glenn Taylor
Email ThisBlogThis!Share to TwitterShare to FacebookShare to Pinterest