Funnier Than A Speeding Bullet 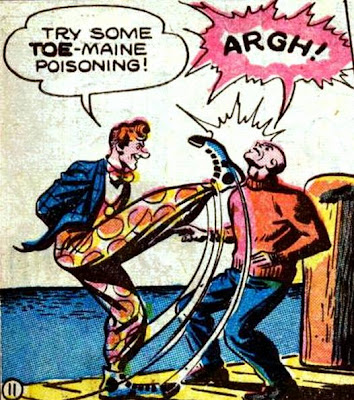 Jerry Siegel and Joe Shuster. Without a doubt, two of the key figures in the history of American comic books. To imagine a world in which their most famous creation, Superman, never existed is to imagine an infinitely poorer world. Much has been written about how Siegel and Shuster were basically forced to watch from the sidelines as their creation reaped massive profits for the company that would eventually be known as DC Comics. Not much has been written about their follow-up creation, Funnyman. And with good reason. It's not too good.

You can read more about Funnyman at Don Markstein's Toonopedia, then sit back and enjoy (if that's the right word) the first story from Funnyman #1 (January 1948, Magazine Enterprises). 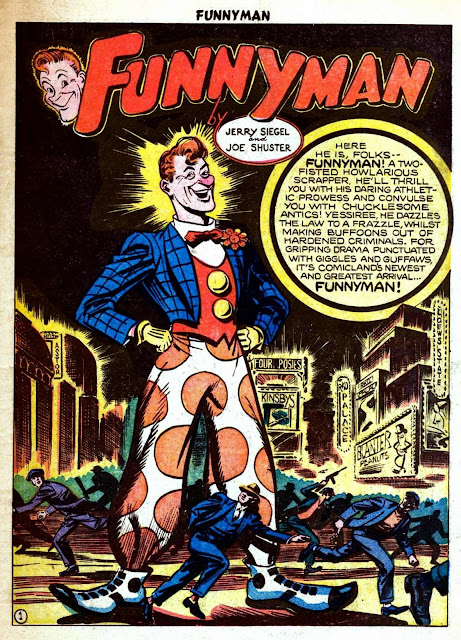 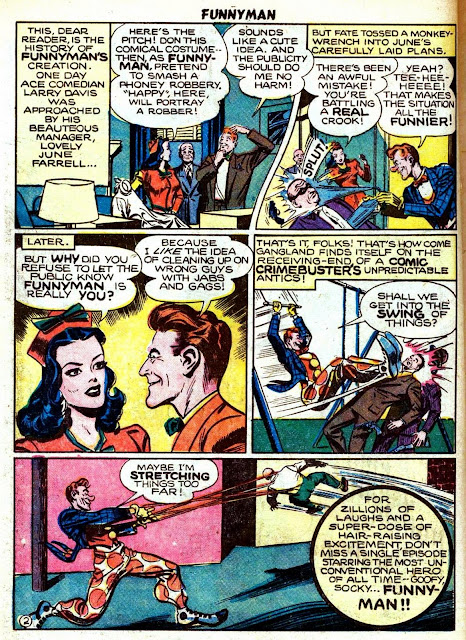 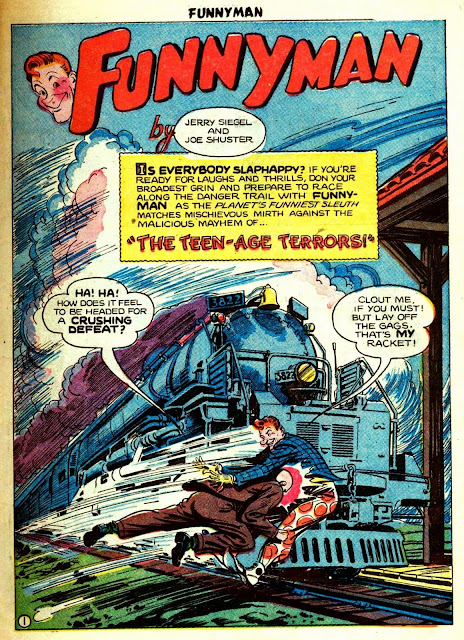 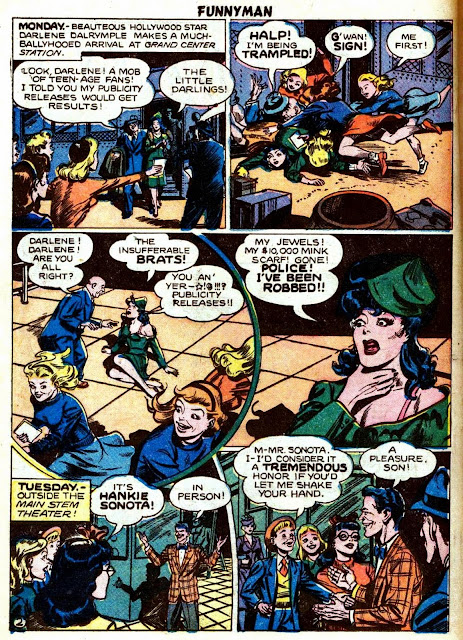 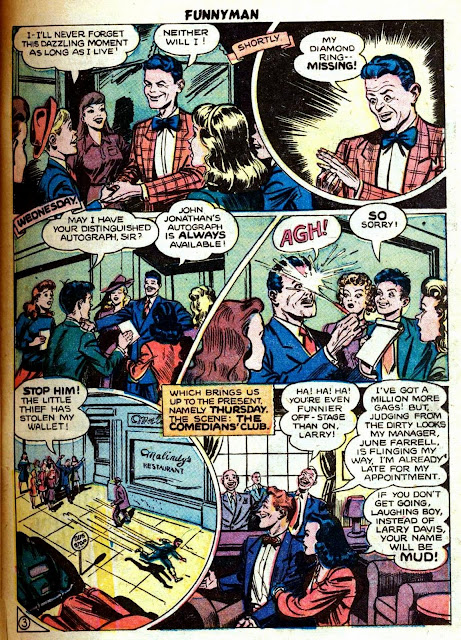 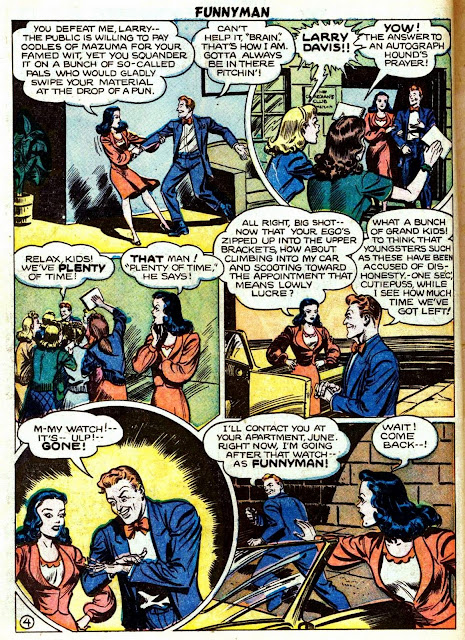 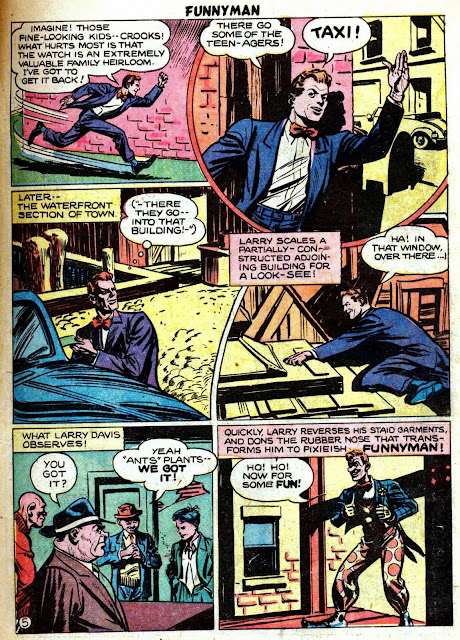 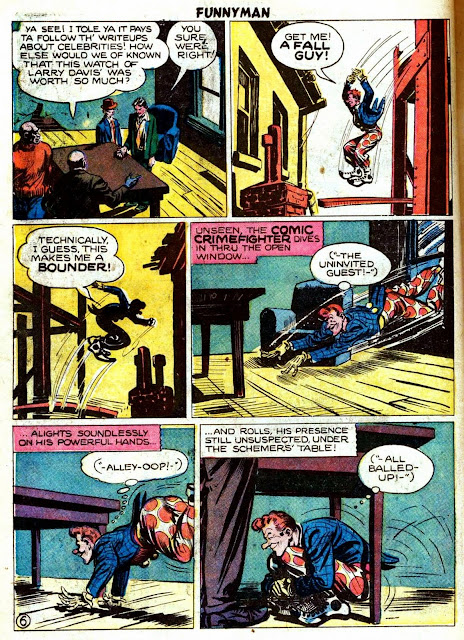 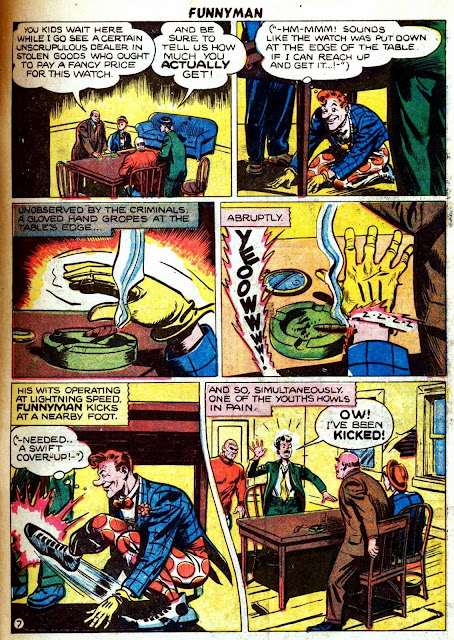 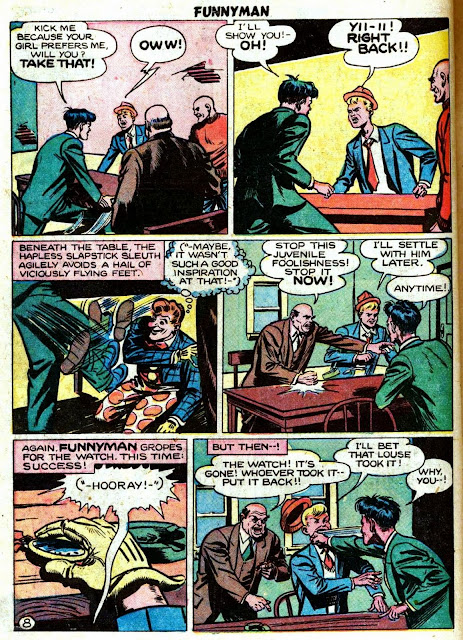 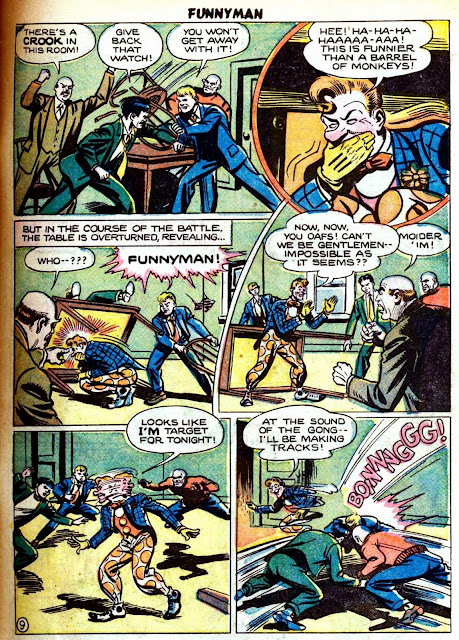 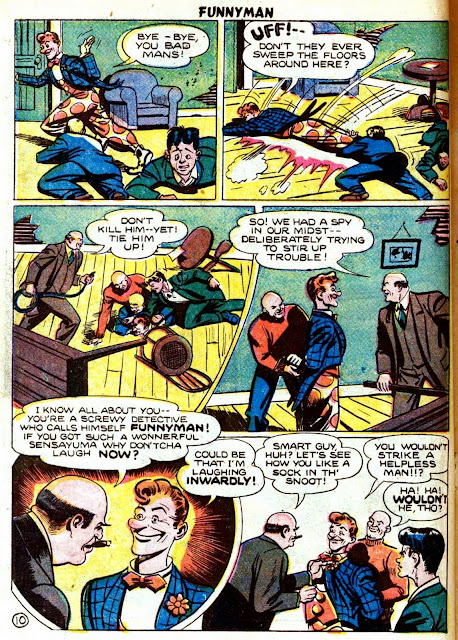 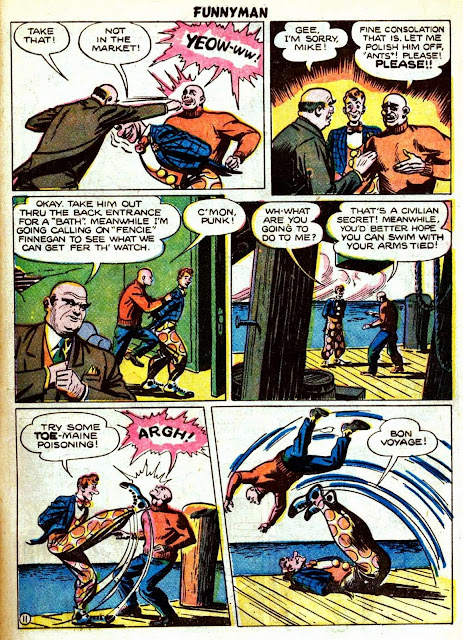 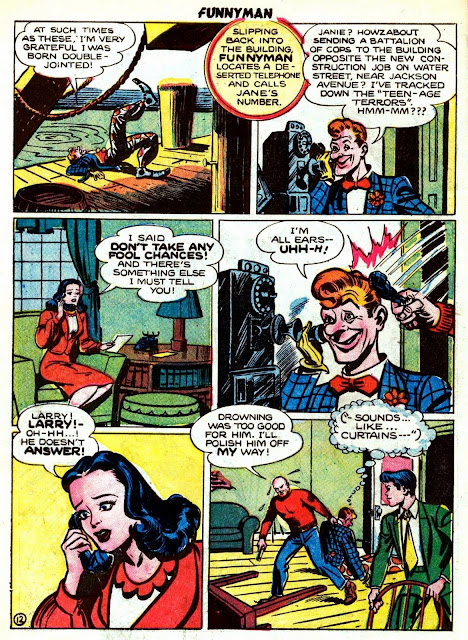 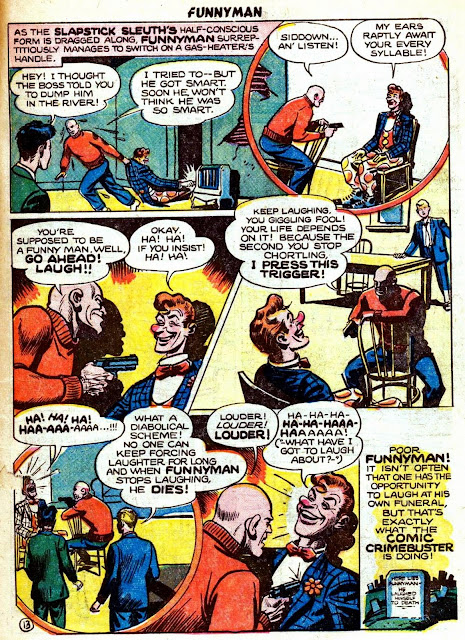 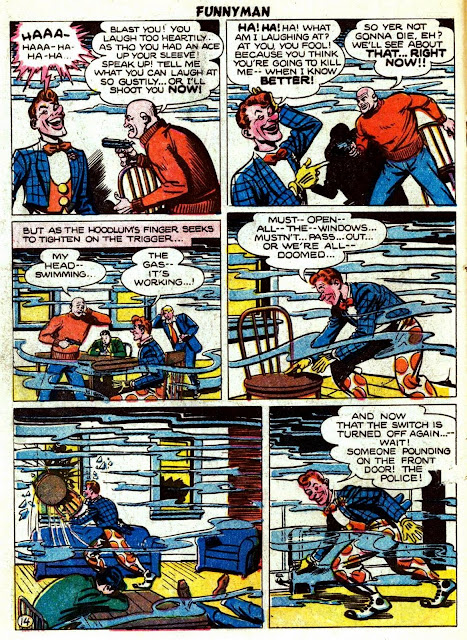 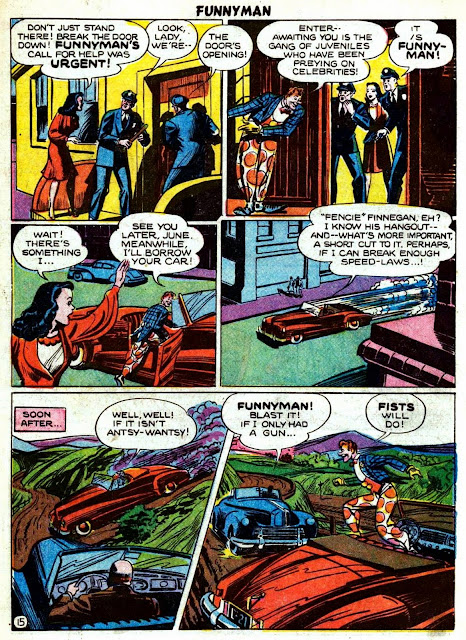 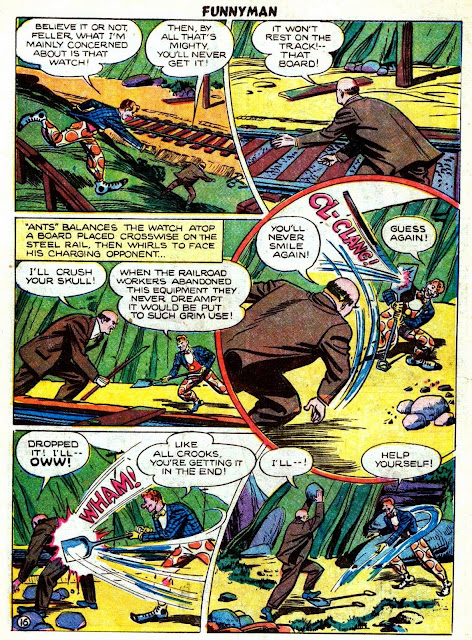 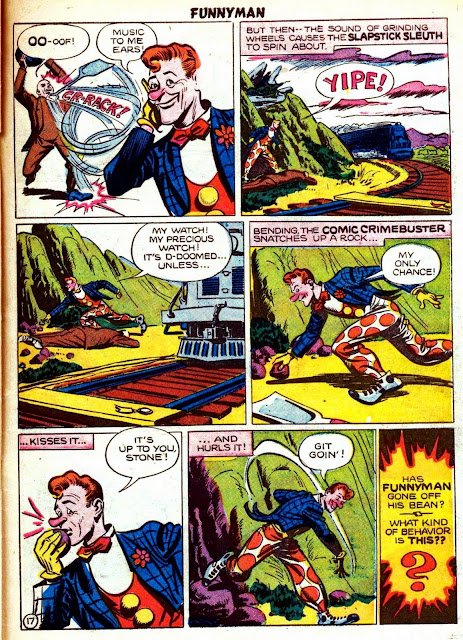 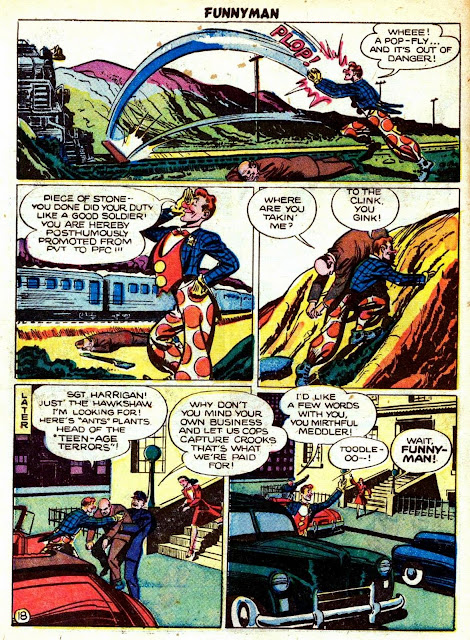 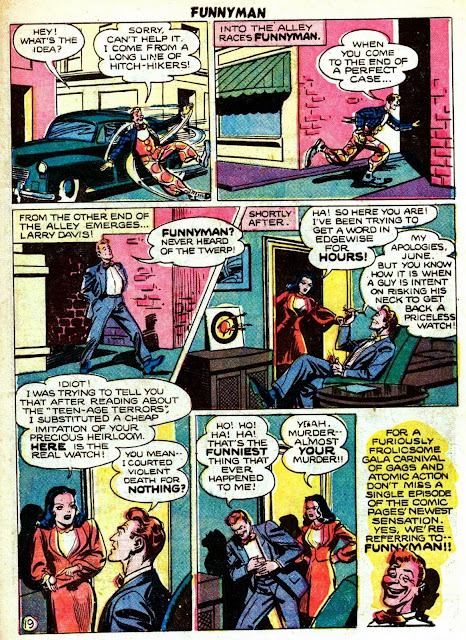 My theory is that, having learned a thing or two about lawsuits, Siegel and Shuster were most deliberate in creating a character that could never be construed as a Superman clone. Superman has black hair. Funnyman has red hair. Superman has tights and a cape. Funnyman wears a clown suit with polka dot pants.

But, y'know, I also wonder if Funnyman was a character that came out of Siegel and Shuster's unconscious desires to laugh again after the bad hand they had been dealt. It could not have been easy for them to see Superman flying high, generating huge revenues from comic sales, merchandising, radio shows, etc. and to not be given their due share of the proceeds. It makes a lot of sense that they would create a character brimming with youthful exuberance and spouting jokes as an antidote to the hurt feelings and lawsuits.

Still, the Shuster artwork ( with a probable assist by Dick Ayers) isn't bad at all, and one must admire the tenacity of Siegel and Shuster to even try following up Superman. Funnyman might just be a footnote in comic history, but Siegel and Shuster's legacy will endure forever. Not bad for two kids from Cleveland.

What do you think of Funnyman? Write right now!

I'm ingredient. It's like the Joker, but a good guy, and modeled after Danny Kaye. About the humor, Jerry Siegel said: "Now, it has been said that Captain Marvel had a great deal of humor in it and that Superman was absolutely humorless, but that just is not true. If you look back at the early stuff, you’ll find that Superman was kidding around quite a bit when he was tearing tanks apart and kicking airplane squadrons here and there and everywhere, and so there was a spirit of fun in the thing. And as a matter of fact, Joe [Superman co-creator Joe Shuster] and I, when we first started going into comics, we had intended to do a comedy [newspaper] strip, so we were very comedy-oriented and that’s why Superman did have this sort of comedy flair to it."
http://www.comicconmemories.com/2009/12/22/alan-lights-1975-san-diego-comic-con-lp-record-listen-to-it-here/

I'm getting a Conan O'Brien vibe from him lol