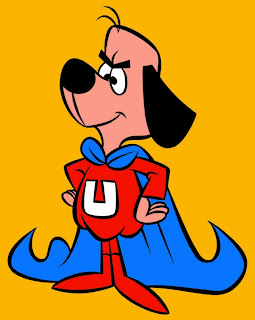 Pinch me, I must be dreaming! My inner child is posilutely delightificated at the news over at TVShowsonDVD concerning a January 2012 release of Underdog: The Complete Series! Amazon has it listed with a runtime of  1260 minutes, which hopefully means that the show will finally be presented as nature intended, uncut, with original titles and openings/closings, and with all the other character shorts (Tennessee Tuxedo, Go Go Gophers, etc.) included.

It just occurred to me that now would be the perfect time to explain to you my passion for things such as this. I had a lonely childhood, but there was something in me determined to overcome all obstacles to happiness. The key for me was in nurturing my own imagination. I instinctively knew on some level that, while bullies could succeed in marring the landscape of my reality, they could never penetrate the outer walls of my fantasy world, a place where I could safely guard my optimistic dreams of the future.

So, very early on, I began to draw constantly. I created my own characters and comic books. The fruits of my creativity were amateurish, but it was great fun drawing, and great therapy too. It was only the next logical step that I should be drawn to the products of other people's creativity as well. At first it was comics and Saturday morning cartoons. There were so many places and times I could escape to when life was bearing down on me in unpleasant ways. As I grew older, I became more and more interested in music. I found I could escape into a song just as easily as I could escape into a book. Any form of creativity shared is a portal to an alternate reality. Being ostracized by classmates was a fortunate thing, as I rarely fell under the sway of peer pressure, the most subtle bullying of all.

There are people who believe it is foolish to spend any time in a fantasy world. There are those that believe that becoming an adult means suffocating their inner child. There is such a large difference between being "childlike" and "childish." As kids, we see our parents, weary from their jobs, complaining about high prices and their overbearing bosses, acting increasingly jaded as the years limp by. I made a promise to myself that I would never be that person. I must tell you, it has made all the difference.

The standard stereotype placed on all dreamers, except for the few like Thomas Edison and Steve Jobs, who derive millions of dollars from their creative pursuits, is that they are lazy, non-contributing cellar dwellers. It isn't the dreaming that is the problem. It is the failure for some to even try to turn those dreams into realities. Some dreams, in the end, do not pan out, but that is no reason not to pursue them. Because I dreamed of being a songwriter, I ended up playing music in a club where I met the eventual mother of my two precious daughters. Pursuit of my dream led me to a reality that surpassed my dream. That's what dreams do. They inspire better realities.

There's no need to fear...
Posted by John Glenn Taylor
Email ThisBlogThis!Share to TwitterShare to FacebookShare to Pinterest