As Thanksgiving Day approaches, I have been pondering all the reasons I have to be thankful, and there are many. Among the greatest blessings I count is an optimistic disposition, one that has enabled me to stay strong through many setbacks. This quality, optimism, seems to be rare. When I am out in the world I feel as though I am surrounded by cynics and negative thinkers. People who have had misfortunes befall them, and now feel it is their duty or right to project their suffering on others. Randy Newman wrote a great song about this subject called "I Want You To Hurt Like I Do." I've never wanted anyone to hurt like I have. And whenever I have hurt, I have made it my top priority to honestly work through my feelings to reach equilibrium as soon as possible, figuring I am no good to myself or anyone else if I allow negative thoughts to weigh me down. Sing it, Curtis...

The Impressions "We're a Winner"

Hate. It's out there. Where does it come from? Is it a moral failing of mankind, a biological phenomenon, or a supernatural force? Is my lack of understanding or unwillingness to participate in the concept of hate a sign of naievete or evolution? Like anyone else, I have been the recipient of hate feelings. I'm sure there have been times when I have thought hateful feelings but somehow those feelings have always been trumped by a desire to forgive and forget, rather than act out in a rage.You know what's weird? Sometimes when people have directed anger towards me and I have failed to reciprocate with anger, it seems to have made them even angrier. What is that about?


I had a bitter enemy,
His heart to hate he gave,
And when I died he swore that he
Would dance upon my grave;
That he would leap and laugh because
A livid corpse was I,
And that's the reason why I was
In no great haste to die.

And then - such is the quirk of fate,
One day with joy I read,
Despite his vitalizing hate
My enemy was dead.
Maybe the poison in his heart
Had helped to haste his doom:
He was not spared till I depart
To spit upon my tomb.

The other day I chanced to go
To where he lies alone.
'Tis easy to forgive a foe
When he is dead and gone. . . .
Poor devil! Now his day is done,
(Though bright it was and brave,)
Yet I am happy there is none
To dance upon my grave.

Of course, I use the word "hate" sometimes, or I should say I misuse it. I might say " I hate brussels sprouts," but that's just a shorthand way of saying "Brussels sprouts are not a food that I care to eat, ever, ever, ever." Sometimes, I get migraines and I will claim to hate them too, but all I'm really saying is that the pain I feel is unpleasant and I wish I never had to experience it. Let's face it, most of the people and things we purport to hate are really just annoyances. That rude driver who cuts us off in traffic, the rain that plagues our parade, the apartment dweller who lives aboves us and likes to play his balalaika all night long. 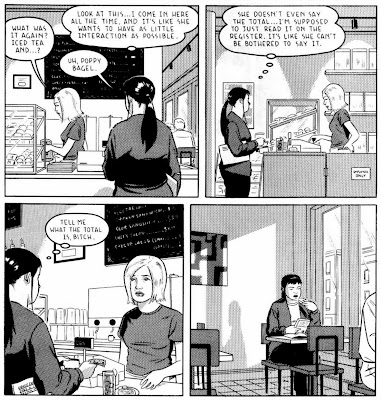 A sequence from Optic Nerve #6, by Adrian Tomine

Well, you might ask, what about Hitler? Surely, he was at least one man that is worthy of all the hate one human race can muster?

Hitler's actions were unconscionable, wicked, horrid, obviously the deeds of a madman. I am glad his plans were thwarted by brave soldiers and citizens, many of whom sacrificed limbs and even their own lives to remove him from power. I feel tremendous sadness for the innocents that were decimated by Hitler's own dogma of hate and intolerance, beautiful souls that had their futures stolen. But hating Hitler? Hating was Hitler's stock in trade. Hating is what Hitler did, and it is not what I do. I would never shed a tear over Hitler's death, and I surely feel great relief that he no longer menaces mankind. I could, in a shorthand way, absolutely state " I hate Hitler," but I think I would really be saying "Hate and the architects of hate must be challenged and defeated by love and the practitioners of peace." The old "hate the action, not the person" theory.

I wonder if I'll get hate mail for admitting a reluctance to practice hate on someone whose behavior was so inhuman?

I'm not claiming a moral high ground. Maybe I was just born minus the hate chromosome. I think there is ample evidence to suggest that children can be taught to hate, brainwashed to believe that some people are inferior because of their skin color or gender or wealth level. I wasn't taught to hate. My parents were deeply committed to the Golden Rule: treat people the way you want to be treated. Ironically, they were largely unsuccessful in practicing that philosophy towards each other. But their countless arguments did teach me that nothing fruitful ever comes from personal attacks or hateful rhetoric. Their hate sprang from frustrations, financial hardship, fear of an uncertain future, the same kind of scenarios that are playing out on a larger scale in today's 1%, 99% America. It must surely be tempting to a person who has been out of work for a year, a person for whom the planning of his or her every meal is an exercise in frustration, a person who can scarcely afford to provide the very basics to his or her own child to be filled with rage an anger and to want to direct that rage toward the people who have gamed the financial system to ensure that they will live in absolute opulence, without the slightest care for the plight of the very people they have exploited to create this reality for themselves.


Why is it then that the hate I have seen in Zuccotti Park and elsewhere comes not from the downtrodden citizens, seeking to exercise their inalienable right to publicly express their frustrations, an idea at the core of our American system, but from the purveyors of pepper spray and rubber bullets whose salaries are paid by the very people they are using these weapons against? From the beginning of the Occupy movement, the media has largely portrayed the demonstrators as radical socialists, dirty hippies, lazy hipsters, thieves, and rapists. The comment sections on these hatchet pieces are filled to the brim with hateful comments against the 99%, but in truth, the anonymous nature of such forums makes it hard to tell how many of these blistering barbs are authentic, and how many are paid for by the machine that has been engineered to keep Americans divided so that we might continue to be conquered. If you had a small child to feed and no money, would you not consider typing hateful comments eight hours a day for say, $1,000 a week?

"It is easy to hate and it is difficult to love. This is how the whole scheme of things works. All good things are difficult to achieve; and bad things are very easy to get." Rene Descartes

As an optimist, I believe that hate is not our future. It didn't work for the Nazis 70 years ago and it's not going to work for Americans now or at any point in the future. I think the Occupy movement would do well to reject hate in thought, speech, and action and to extol the winning qualities of love, peace, and brotherhood no matter how associated they are with the "dirty hippies," no matter how ridiculed those concepts are by the well-oiled machine of hate.

I believe hate is a kind of slavery, and love is the key to freedom. 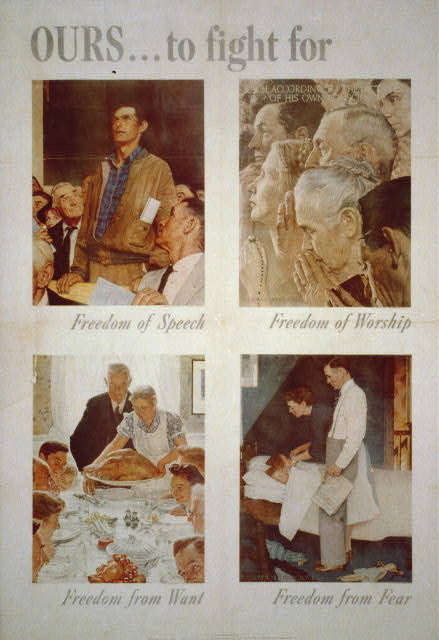 And as Thanksgiving approaches, I am thankful that I still believe that.

"The comment sections on these hatchet pieces are filled to the brim with hateful comments against the 99%, but in truth, the anonymous nature of such forums makes it hard to tell how many of these blistering barbs are authentic, and how many are paid for by the machine that has been engineered to keep Americans divided so that we might continue to be conquered. If you had a small child to feed and no money, would you not consider typing hateful comments eight hours a day for say, $1,000 a week?"

Sure, I'd do it. Where do I sign up? But there's a problem here, that I also see among people putting down the OWS movement. It's widely assumed by them that many of the Occupiers are employed by unions and ACORN.

See the problem? Both you and the folks you are battling are not discussing the issues directly; instead you are imputing phony motivations so that you don't have to engage the other side's arguments.

Pat, I'll concede the point because I really was only speculating that people might be getting paid to troll comments sections. I don't really see myself as "battling" anyone though, and I hope this ideological "civil war" becomes more civil as time marches on. Thanks for commenting!