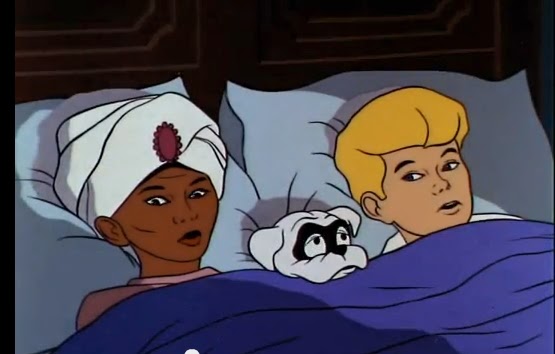 The sixties was such a fertile time for pop culture, especially after The Beatles landed in America. I think we had all better prepare ourselves for an unprecedented flurry of 50th anniversary celebrations. Why, I wouldn't be surprised if the upcoming onslaught of 50th anniversaries ushered in a full scale sixties revival, although the thought of Sarah Palin wearing go-go boots makes me a little ill.

Debuting on television exactly five decades ago this week, Voyage To The Bottom Of The Sea is a show I need to stare at more often, especially after reading Joe Torcivia's glowing tribute to the show on his blog, The Issue at Hand. Be patient with me, Joe. I'm still slogging my way through Fireball XL5.

Over at Yowp, Yowp raps about Hanna-Barbera's Jonny Quest in a well-researched piece that includes some reviews written about the show when it was all shiny and new, fifty years ago. Is Jonny Quest the best action cartoon series ever made? Name me one better.

Not to be outdone, Terence Towles Canote at A Shroud of Thoughts offers up an interesting history of Bewitched, still nose-wigglin' it's way into our living rooms after all these years.

I'll leave you with a Donna Loren performance of the theme from Goldfinger, which just turned fifty, from a 1965 telecast of Shindig!, which premiered, yup, you guessed it, this week in 1964.