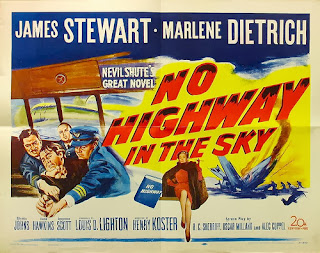 The 1960s was a highly creative and history-making era. Therefore, a slew of 50th anniversary celebrations are looming on the horizon. Of late, the Golden spotlight is focusing on the Kennedy Assassination, Doctor Who, and The Beatles.

Of course, some things are bound to slip under the radar. For example, one month ago marked the 50th anniversary of one of the most iconic episodes of The Twilight Zone, the gripping yarn "Nightmare at 20,000 Feet," which starred a young William Shatner as an airplane passenger bedeviled by a wing hopping gremlin. The episode first aired on October 11, 1963.

Although this episode, written by recently deceased I Am Legend scribe Richard Matheson, deserves it's reputation for originality and suspense, it was not entirely without precedent. Twelve years prior, Jimmy Stewart and Marlene Dietrich co-starred in a British film with similar themes called No Highway in the Sky.

In the film, Stewart plays one of those befuddled genius types who sometimes forgets things like where he lives or where he keeps the sherry. He works at the Royal Aircraft Establishment, and his current research involves testing his theory that the new "Reindeer" airliner has a flaw: after about 1440 hours of service, the tail will fall off due to metal fatigue. In a strange twist of fate, he finds himself on such an aircraft, one that has clocked in just over 1400 hours.

In a parallel to the later Twilight Zone episode, he tries to convince the pilot, a stewardess, and a passenger that they are all in terrible danger, but to no avail. For the rest of the film, his sanity comes into question. It's a good film and Marlene Dietrich is fine as Monica Teasdale, the elegant movie star passenger. Glynis Johns is absolutely charming as the caring flight attendant.

No Highway in the Sky is currently streaming on Amazon Instant, and is free for Prime subscribers.