Forward, Into the Past! 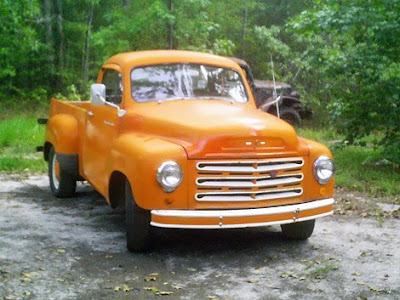 My rich Uncle Davey, who made his fortune speculating in Mylar, passed away recently of complications resulting from a nasty paper cut. In his will, he left me a most remarkable gift, a fully restored (and very orange) 1959 Studebaker Scotsman pickup truck.

Imagine my surprise when I discovered that Uncle Davey, who had always been a sci-fi enthusiast, had made some, er, rather unusual modifications to the truck. Apparently inspired by the movie Back to the Future, the old dog had spent many years developing an actual flux capacitor. I imagine he must have travelled to the future at some point, because it is equipped with a Mr. Fusion fusion generator which converts garbage to fuel. It is also equipped with a device that will allow me to transmit images and sounds directly to this blog.

As a result of Uncle Davey's generosity, I am now preparing to take a week long field trip to the past, the first of many such trips I'm sure. I've stocked the Scotsman, which I've christened "Emma," with all the necessaries and I am about to embark. Destination: 1968.

Hope this works! Wish me luck!

That's my photo. And my video. And my truck. Thanks for asking permission.

"Sorry we hurt your field mister!"