The Lost Finale: Some Thoughts 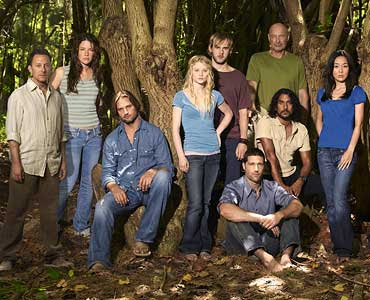 Sunday evening Pooh and I attended Raleighwood Cinema Grill's screening of the Lost finale. It was the end of an odyssey that began for us eight months ago. Like the many people in attendance, we were on the edge of our seats for the first two hours and fifteen minutes. There was much cheering and laughter.

When the final scene at the church began, however, the room fell silent. The "flash-sideways" timeline was revealed to be an afterlife construct formulated by the protagonists for the purpose of a reunion. Jack's father opened the big door and a heavenly light surrounded everyone present. Meanwhile, back on the island, Jack caught a glimpse of the airplane piloted by Frank Lapidus, smiled, and died.

I had expected beforehand that the final scene would inspire a tremendous ovation. This did not happen. Instead there was a small smattering of feeble handclapping that lasted only a few seconds. It was unclear whether or not the attendees were disappointed, saddened, or confused by the ending. As I walked out of the theater, I felt the writers had copped out, presenting a soap opera ending to what I considered to be an epic fantasy adventure.

This puzzled me though. I wondered how it could be possible that every single episode could be so finely crafted, only to jump the shark fifteen minutes before the end. I realized that I had a knee-jerk revelation to the "flash-sideways" being revealed to be Limbo, rather than an alternate reality. I also realized that I had underprepared myself to bid farewell to a cast of characters that had become like great friends to me. As someone with the innate ability to blur fantasy and reality at will, I really felt as though I had taken this long strange trip with Jack, Sawyer Kate, Locke, Hurley and the rest.

A scan of the initial reactions on the internet revealed that I was not alone in my mixed feelings. Emotions ran the gamut from deliriously satisfied to horribly disgusted. They were emotional reactions to an emotional ending. There was also a great deal of confusion. Many people somehow got the notion that the characters must have died in the initial plane crash. Someone asked how Hurley could be The Chosen One since Jack didn't recite an incantation over the bottle of water. Some poor soul still wanted an explanation for the polar bears.

I find Lost to be an excellent litmus test concerning the I.Q.'s, tastes, and attention spans of viewers. A lot of people loved only the first season, but bailed when sci-fi elements came more into play. One viewer posted a comment indicating that he had watched the first season, then the finale, which he thought sucked. A little judgmental for a clueless person, I think. Lost has given me a new appreciation for that ardent Trekkie who can describe the exact layout of the Starship Enterprise.

There are no shortcuts in this show. Virtually every episode added at least one or two pertinent details to the legend, usually more. Lost constantly challenged the viewers to keep pace with it's ever-growing cast, their motivations, and the many secrets of the island itself. The fact that it alienated many viewers during it's six season run doesn't surprise me a bit. The die-hard fans that remain will surely keep Lost's legend with them for many years to come, and I won't be surprised if that legend continues to grow with the same fervor as Star Trek's. At it's core, Star Trek was about people of different ethnicities, working together to explore unknown territories and protect civilization from evil forces, forging deep friendships and gaining new insights into themselves along the way. So was Lost.

I rewatched the final episode a short while ago, this time knowing the true nature of the "flash-sideways". To my mind, it all makes sense now, and it's a beautiful ending, the ending these characters, who I care so much about, truly deserve. I had to shed a tear or two for Jack, whose arduous journey ended with the ultimate sacrifice, to save mankind from the evil that lurks beneath the island, forever held in place by the light of life, a little bit of which is in all of us.

Here's hoping Hurley and Ben have a peaceful uneventful watch on Lost Island, that Lapidus brings his big bird in safely, and that Desmond doesn't have to wait until the "flash-sideways" to reunite with Penny.

Incidentally, if you have any questions about the mythology of Lost, post them in the comments. Maybe we can untangle any ambiguities together, eh broother?
Posted by John Glenn Taylor
Email ThisBlogThis!Share to TwitterShare to FacebookShare to Pinterest

Couldn't we have had a guest appearance by Jimmy Buffett in the final episode of Lost?