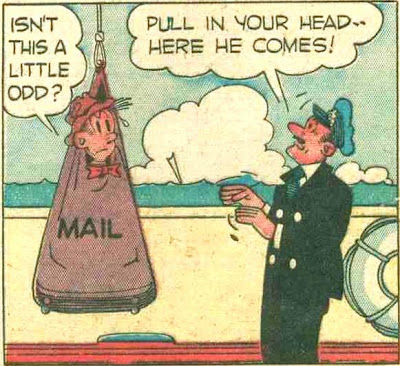 Today I want to shine a spotlight on Blondie, a comic strip that turns 80 years old this year. This link will shuttle you over to the official website, where strip creator Chic Young's son Dean relates the beginnings of the strip. There is also a rundown (also written by Dean) of the artists who have drawn the newspaper strip. Not mentioned is Paul Fung, Jr., the primary artist (for over 40 years!) of the Blondie comic books.

Knowing that Dagwood was formerly a rich playboy, disinherited by his family for marrying Blondie (maiden name Boopadoop), adds to the sympathetic appeal of the character. Indeed, all the characters in Blondie, including Blondie herself, seem to exist only to make Dagwood's life a neverending hell. Can't a man eat a giant sandwich and then sleep on his couch in peace? 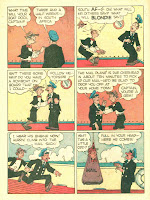 I wish that I could recall the date, but in any case this comic book story is an extended recycling of a Sunday episode of the newspaper strip.

That article on artists makes no mention of Michael Gersher or of Denis LeBrun!

Great illustrations by either by
Paul Fung or Chic Young.